Love, Literary Theory, and Other Things That Go Bump in the Night 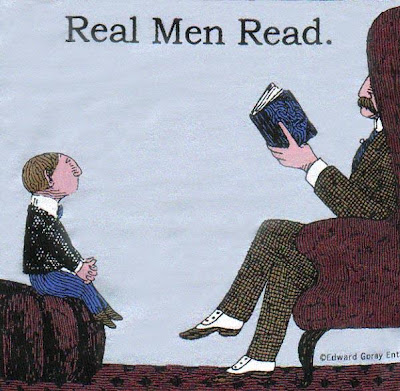 Buy this T-shirt from the Edward Gorey House

Nineteen years ago today I met the man I would marry.  Yep.  We met on Halloween.  We were in college, but we didn't meet at a Halloween party or at a bar; neither of us was in costume, and we were both completely sober (amazingly).  Actually, we met on a bench outside a classroom building before a three-hour evening class on literary theory.  We were both English majors, and since the beginning of the term I had harbored a secret crush on him from afar.  Well, not that far actually, since we had mutual friends and we sat one row away from each other in this very intense upper-level seminar of about a dozen students.

It was already dark outside and the cold crept into my bones through my thin cotton jacket.  I was heading to class early to finish up my reading before the lecture began, and, as usual, I was kicking myself for not finishing on time.  It was useless to try to cram in twenty pages of Martin Heidegger or Jacques Derrida at the last minute.  They were hard enough to comprehend when I had hours of time and a full pot of coffee brewing.  To make matters worse, I'd had nothing to eat all afternoon but a carrot and a bit of hummus.  My stomach grumbled bitterly as I hunched into the frosty evening air, my shoulder aching from the weight of a messenger bag stuffed with the usual English major's assortment of used Penguin classics and Norton anthologies.  Through my fog of self-pity laced with self-loathing, I suddenly thought I heard someone call my name.  I glanced around, but nearsighted girl that I was, I saw no one, so I reached to open the front door.  As I began to step inside, I heard it again, this time louder.  I spun around, and there he was, smiling at me like a cheshire cat seated on a low brick wall: the boy I'd been watching, the one with the black leather jacket and the scar that ran down the length of his right cheek; the one who wrote with a fountain pen and who spoke in what sounded like perfectly constructed sentences whenever our professor called on him in class; the one whom I'd often seen sitting alone in the cafeteria, reading Samuel Beckett or Alain Robbe-Grillet.  He was calling to me.  He knew my name.

I walked over to him, and as soon as he said hello, all my worries about class melted away beneath the glow of the streetlamp that arched over us.  He invited me to sit with him.  I don't remember any small talk.  It seems to me we dove headfirst into talking about books and life and all the best stuff that very night, and we've never stopped since.  It really was love at first--well, if not sight then words.  I knew that night what I know now: nothing makes my heart beat faster than a man who reads.
Posted by Gigi Thibodeau at 12:00 AM