Like so many others, we've been hunkering down, stocking up, and shoveling out an awful lot over the past week.  More snow is on the way Monday, which is fine by us.  We'll put another log on the fire. 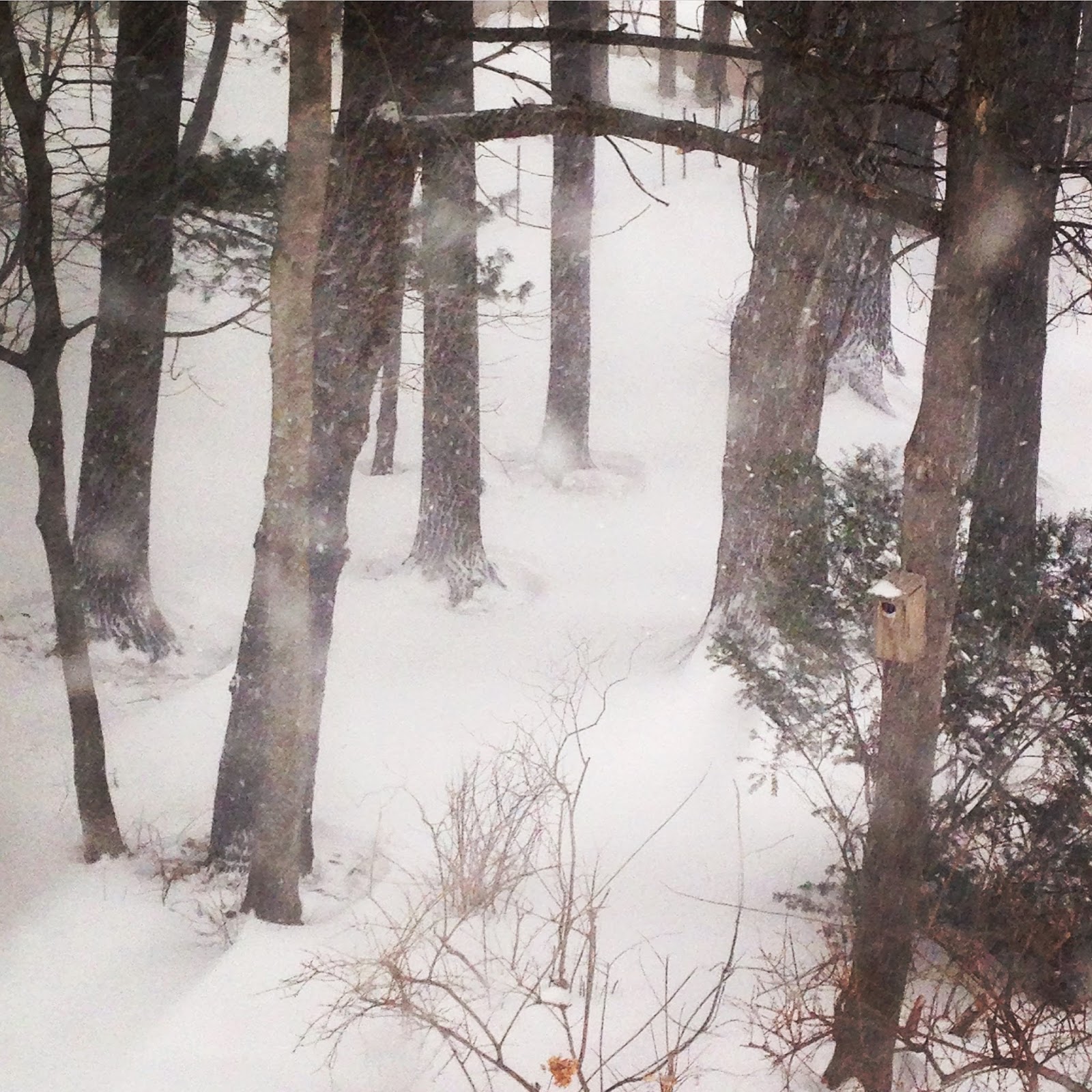 I grabbed the above shot out my study window during the "Great Blizzard of 2015."  We only received about 22 inches--much less than some folks south of us.  Then a second, smaller storm blew in on Friday.  I think we're up to about 30 inches, which translates into snowbanks up to my shoulders.  This time Monday they will be well above my head! 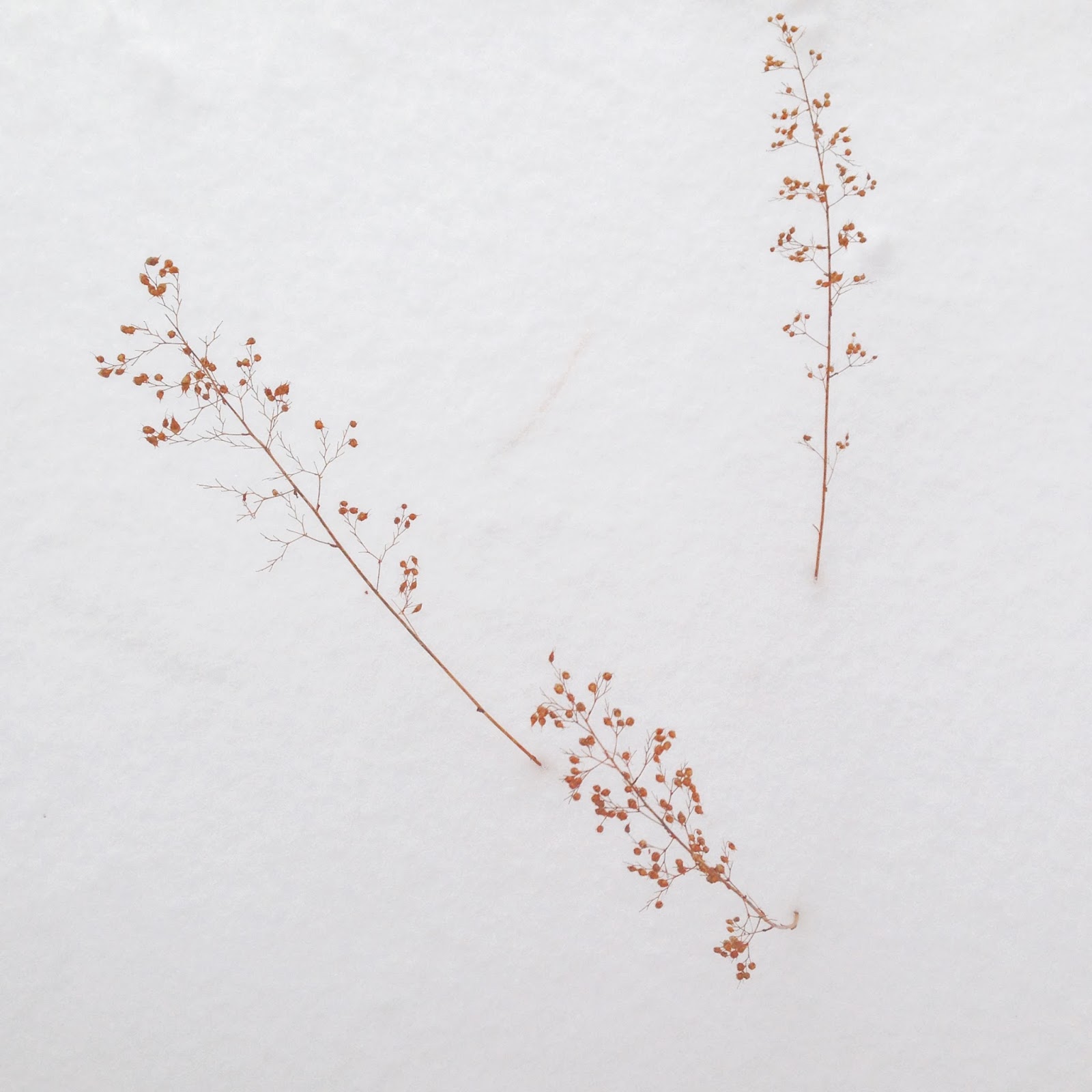 I took a break from shoveling on Monday to take a few quickies of the garden with my iPhone.  I especially love the bits of sprigs and twigs that seem so delicate, yet don't break, even under two or three feet of snow. 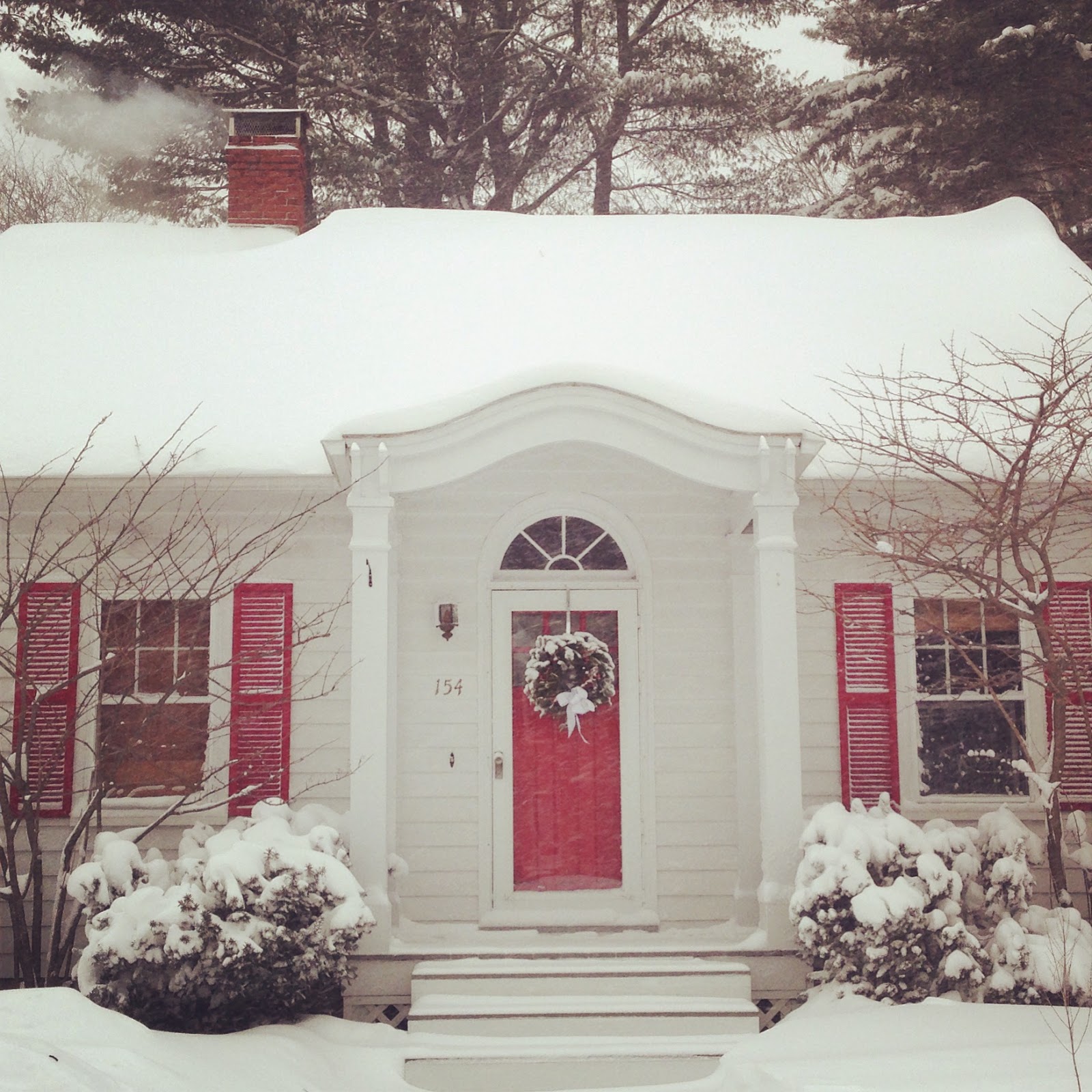 Mr. Magpie shared a fantastic piece with me from the Boston Globe about "Snow Removal Types."  It had us giggling, as we know people who fit nearly every category of snow shoveler listed here.  Mr. M. is definitely "The Incrementalist," so, during a heavy storm, we tend to head out every two to three hours to do another pass over the drive and walkway.  At the time I shot this photo, at least 12 inches had already fallen.  Notice the nearly clear front porch?  That's the work of the Incrementalist.  ;) 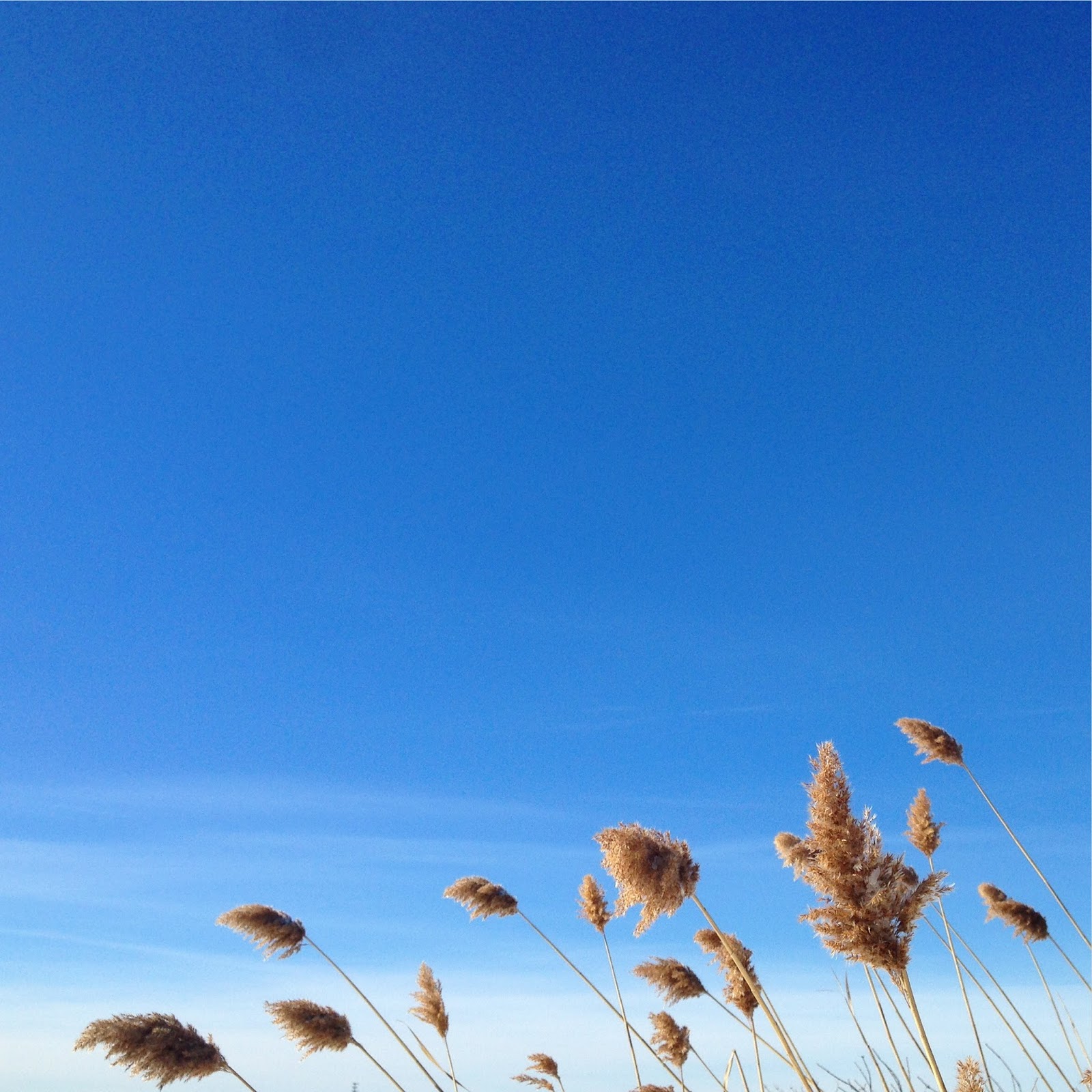 Maybe the best part about the snow has been that we've been able to get out to do some incredible snowshoeing.  The days in between storms have boasted gloriously blue skies like the one above, and very little wind. 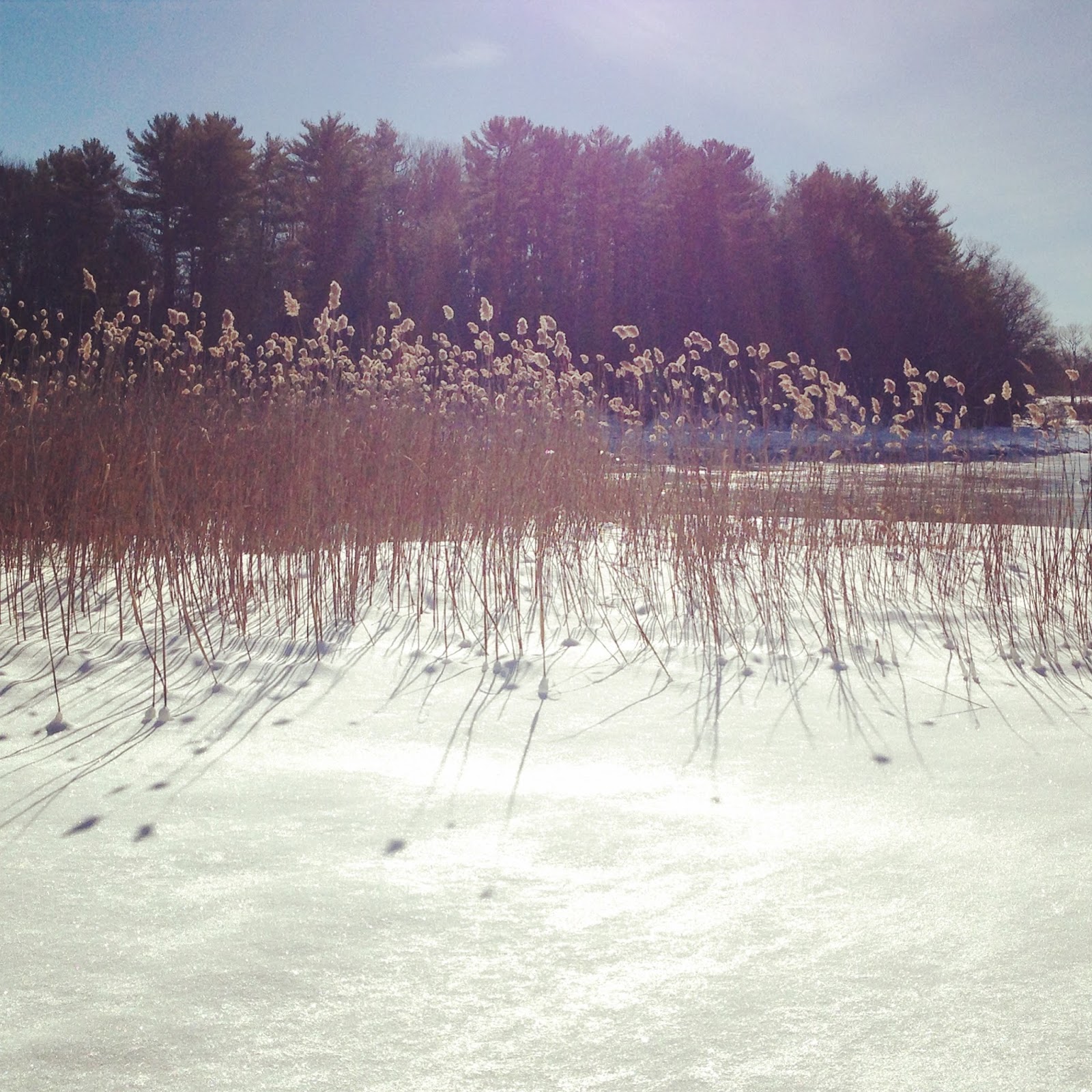 We watched a documentary the other night about some folks who walked the John Muir Trail in California.  Sprinkled throughout the film are quotes from the man himself, and one in particular that I had forgotten about (although how I do not know) struck a chord with me: "When one tugs at a single thing in nature, he finds it attached to the rest of the world." 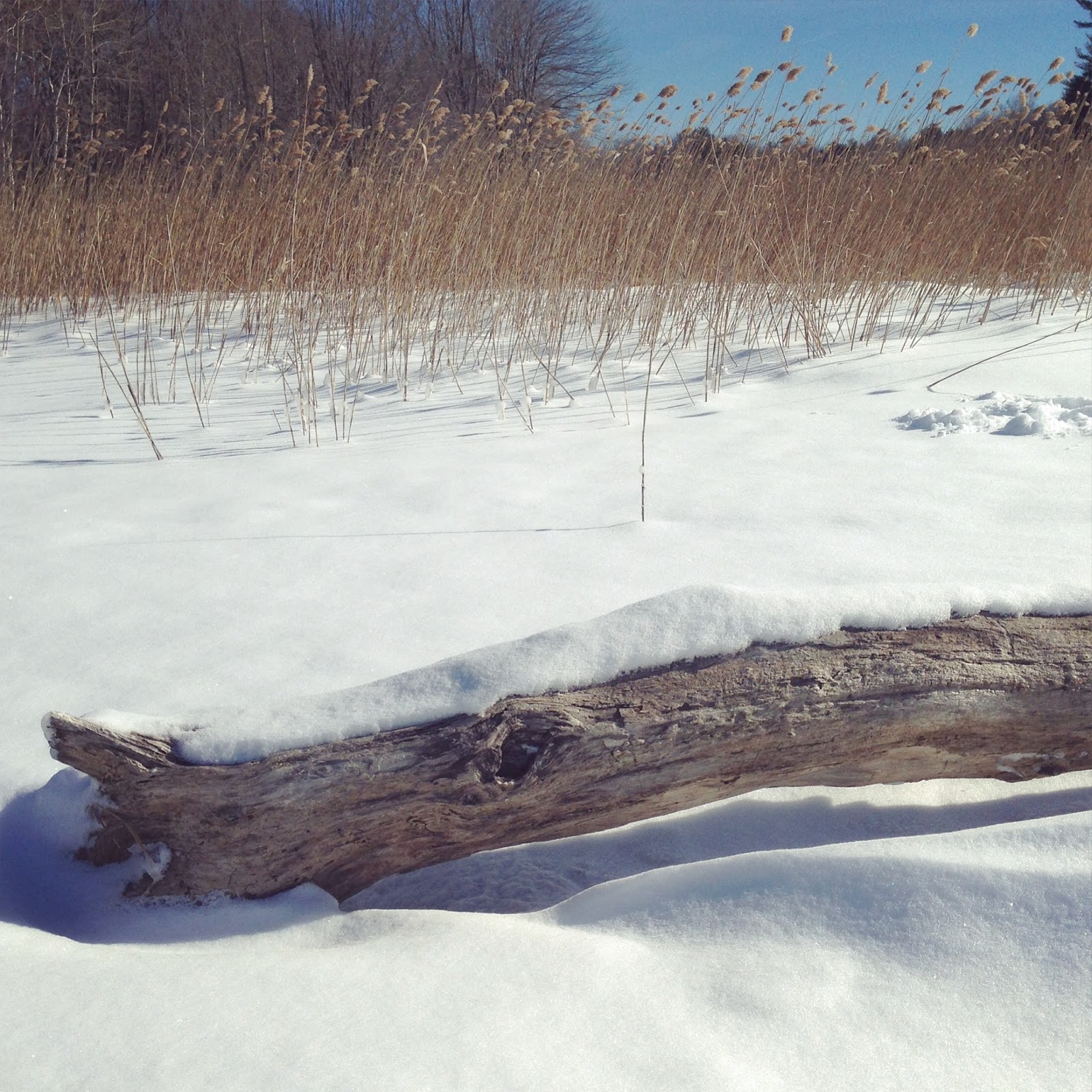 Trudging out onto the salt marshes of Maine Audubon at Gilsland Farm, those words echoed in my mind.  Across the Presumpscot River estuary, cars rushed along 295; overhead, the vapor trails of planes crisscrossed the sky; at the edges of the preserve, smoke billowed from the chimneys of the large show homes wealthy folks have built for the glorious views.  None of it stopped us from seeing eyelet-lace rabbit trails in the snow . . . or Eastern bluebirds in the trees that bordered the meadows . . . or the glowing white underside of a gull against the blue as it flew above us.  The human world is so loud and harsh and destructive so much of the time.  I'm grateful for every bit of nature we still have, and I hold onto each piece as tightly as I can.

So, more snow is on the way, which will mean more wintry shots from me, I'm sure.  For those of you shoveling your way through January, February, and March, I hope you're staying as warm and safe as possible, and I also hope that you're getting a chance every day to enjoy a little of the beauty of winter, too.  xo Gigi

Scout and the Meaning of Life 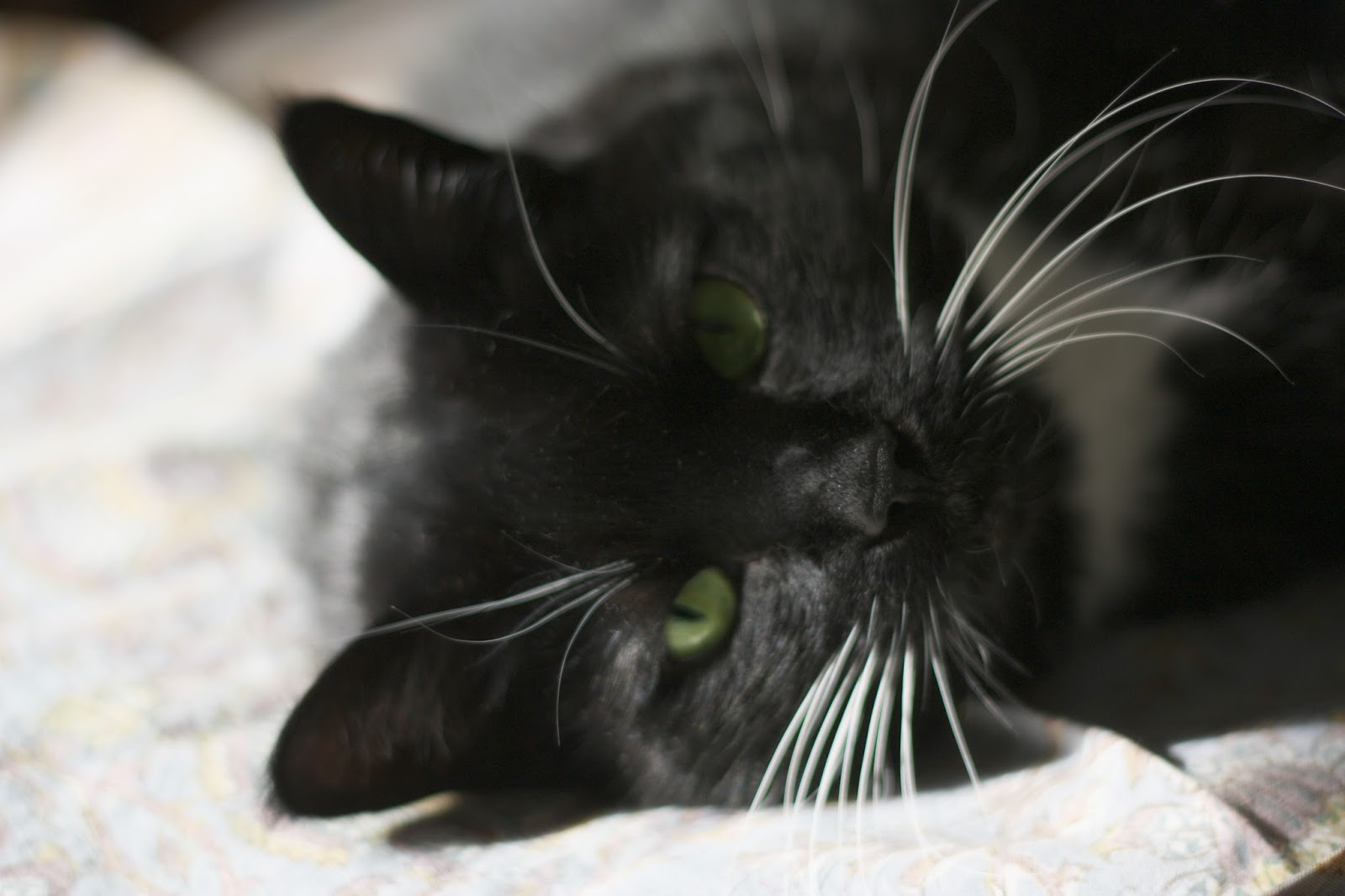 January is a philosophical month for Miss Scout. 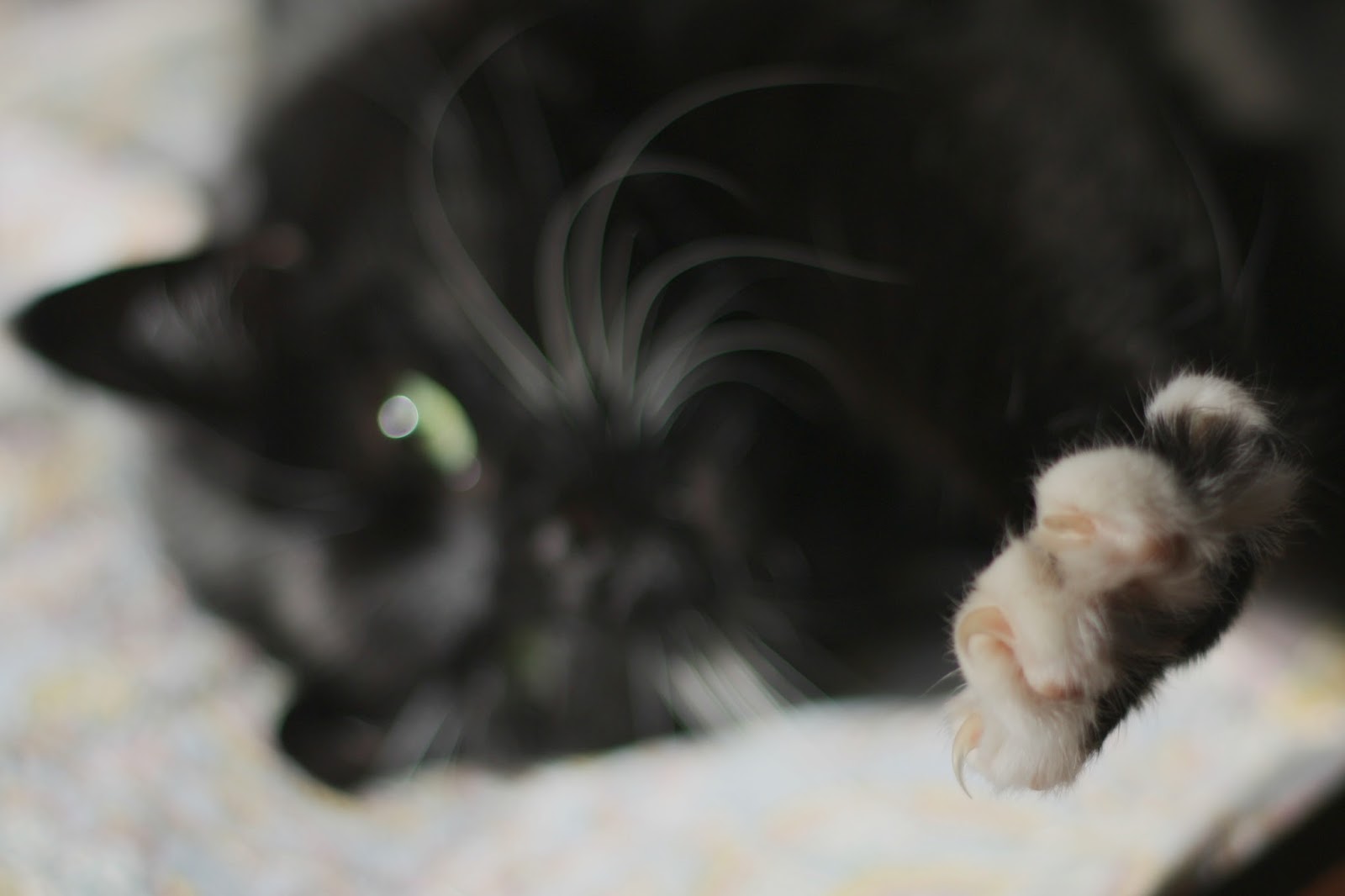 The inhospitable weather has us all cooped up more than usual.  Well, Dill and Scout are indoor sorts of folks, so they're always in the house, but come spring, they do love to laze on their porch with a warm breeze blowing in through the screens, gently ruffling the fur on their bellies.  Scoutie spent this afternoon in the living room, lying in a feeble beam of January sunshine, dreaming of that first April day when we'll throw open the windows to let in the scents of grass and mud and of all the beasties who live outdoors.

I won't lie.  She's a practical girl at heart.  Hunting is her favorite sport, so it's just as well for all the mice and squirrels and chipmunks and birds that she never leaves her porch. 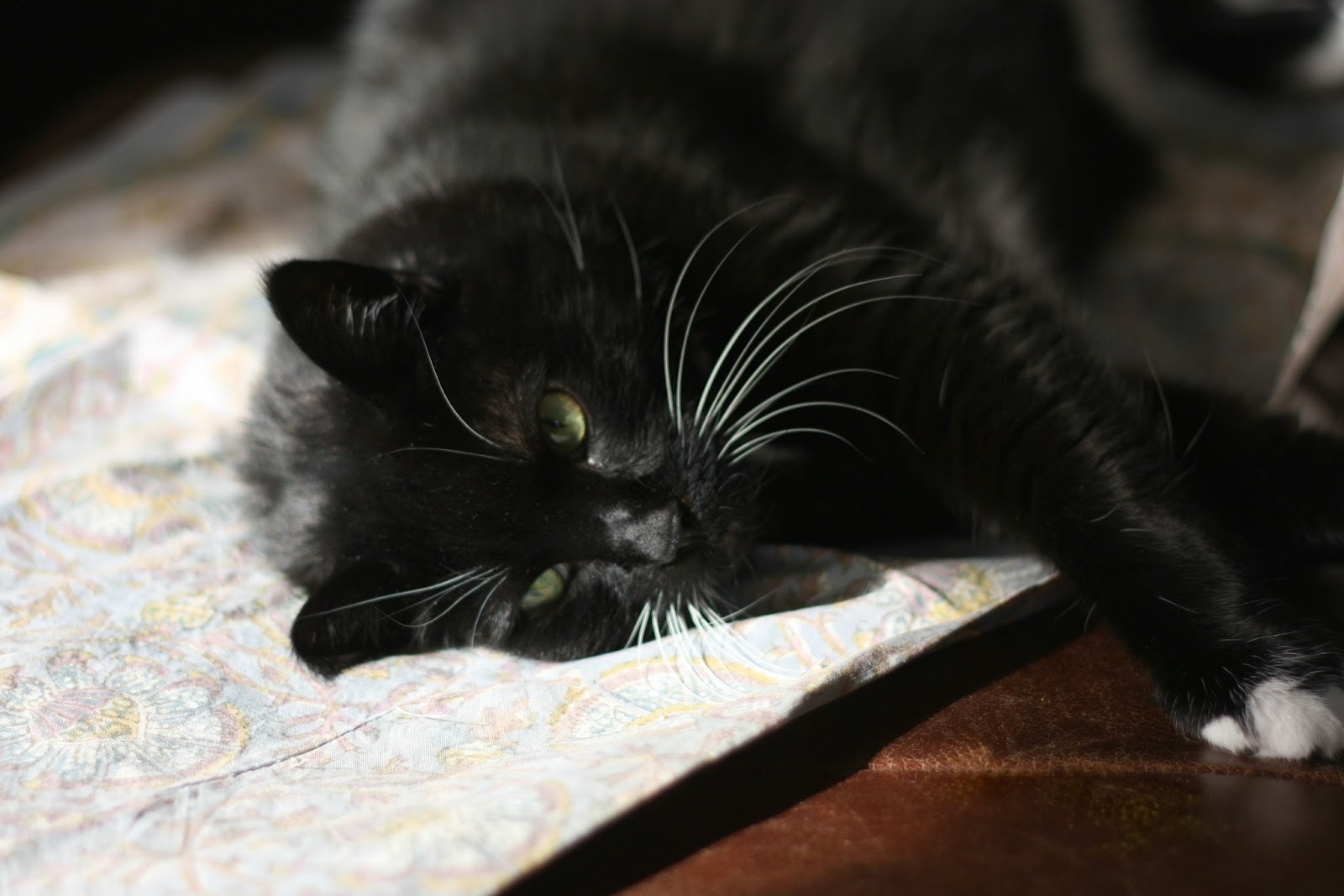 Since she's relegated to killing nothing more an occasional spider or whatever crawly things live in the corners of the cellar, she has to find other, more creative, ways to pass the time.  Thus, in addition to dreaming, she has taken up philosophizing. 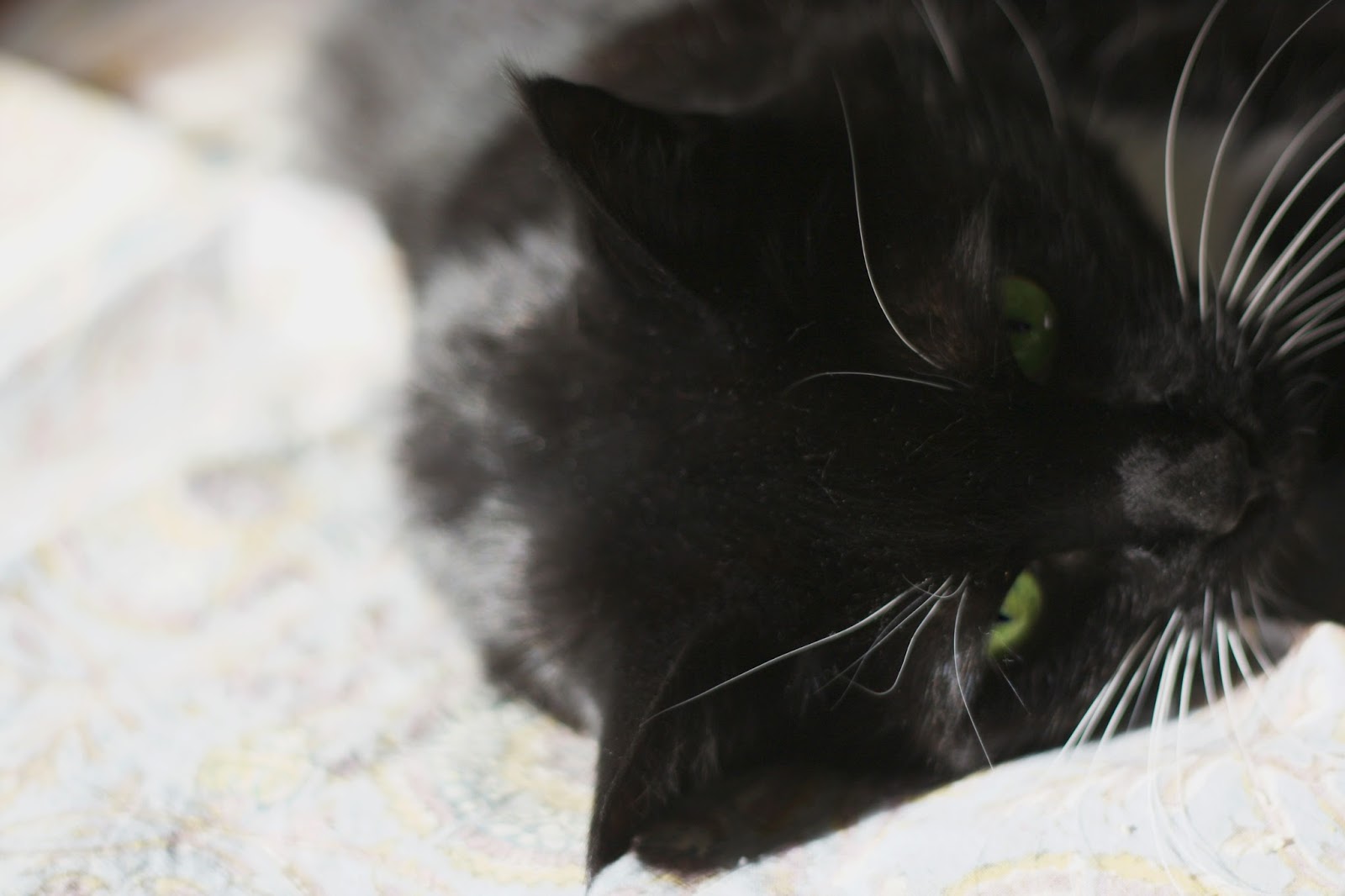 Scout eschews ethics, as she most certainly fits Stephen King's categorization of cats as "those amoral gunslingers of the animal world."  Instead, she focuses her very considerable attention (never try to beat her in a staring contest) on matters of ontology.  I hear her sighing often as she ponders the meaning of life.

Tell me, Dill, why are we here?
What's it all for?
What is the purpose of life?

I'm not as sophisticated or deep a thinker as Miss Scout, but at this point, as far as I can tell, she has reached three essential conclusions:

Why are we here?  Treats.
What's it all for?  Cuddles.
What is the purpose of life?  Naps.

Some would say, "Yes, but that doesn't get to the very essence of ontology, Miss Scout.  You aren't asking the most fundamental question: What is existence?  In other words, What does it mean for a being to be?

To such questions, Scout responds by rolling on her back, squinting her eyes, and giving the most inscrutable of smiles.

Such is the mystery of life Scout. 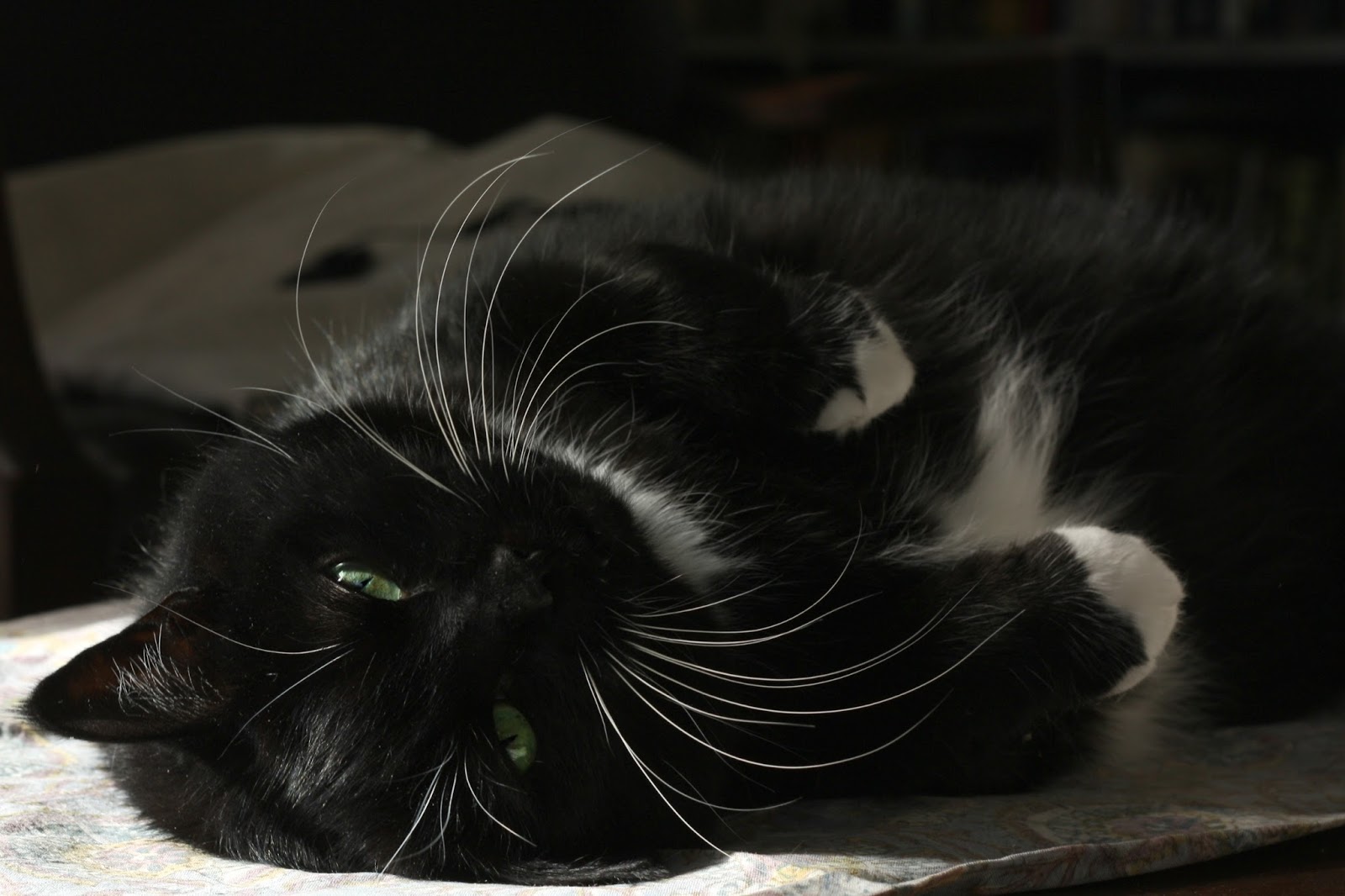 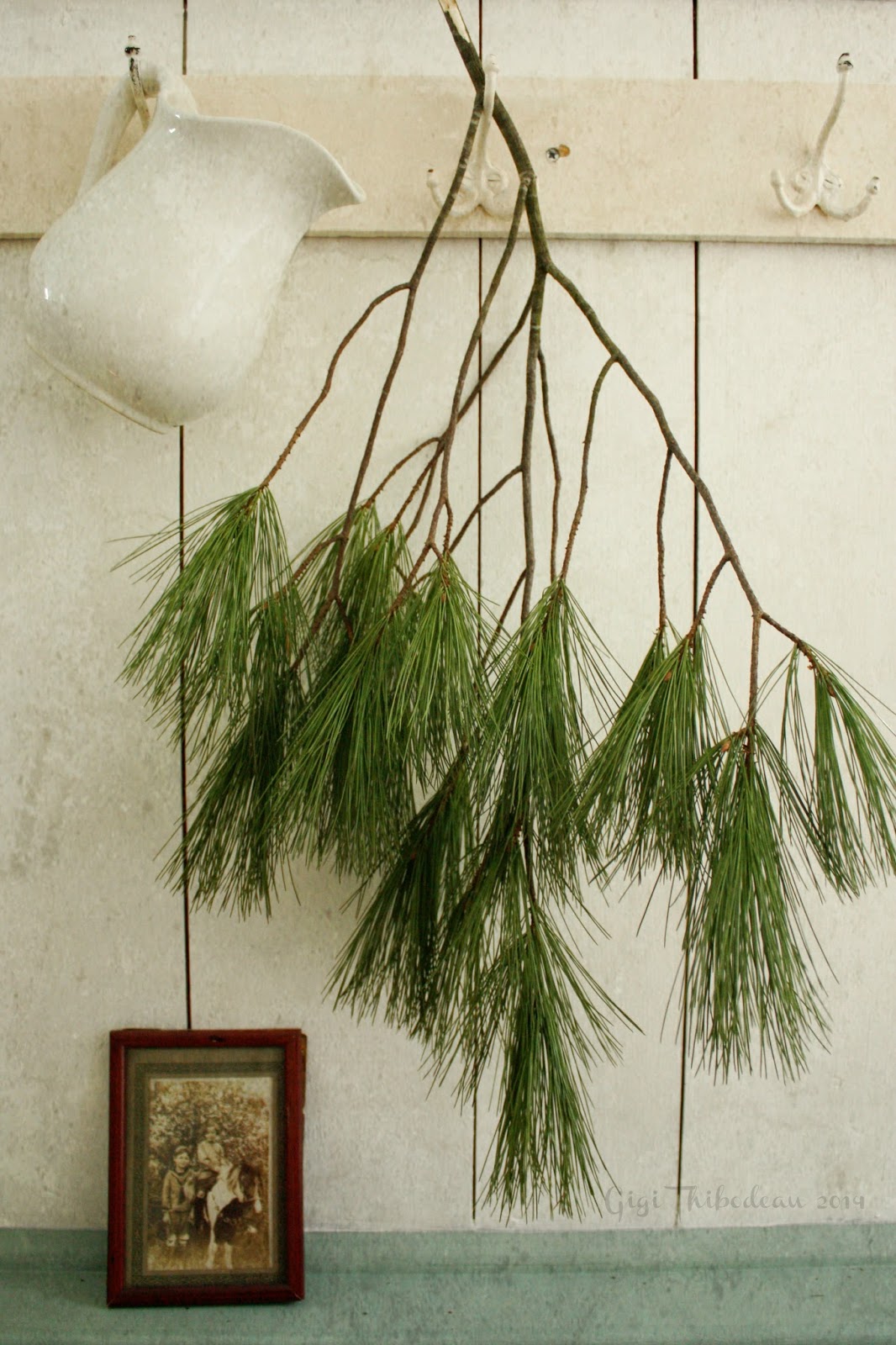 The wind raged and the rain lashed at the clapboards of our little house last night.  A fleeting thought flashed through my mind in the moment before drifting off: the giant white pine in the yard--a crack splitting the dark, and a rush of air and limbs as the great god of all trees fell.  I'd had a vision like this once before, when we lived on an island a few feet from shore.  One night during a storm, my mind's eye had seen the waves bounding up over the rocks and carrying us away, cats and house and all. 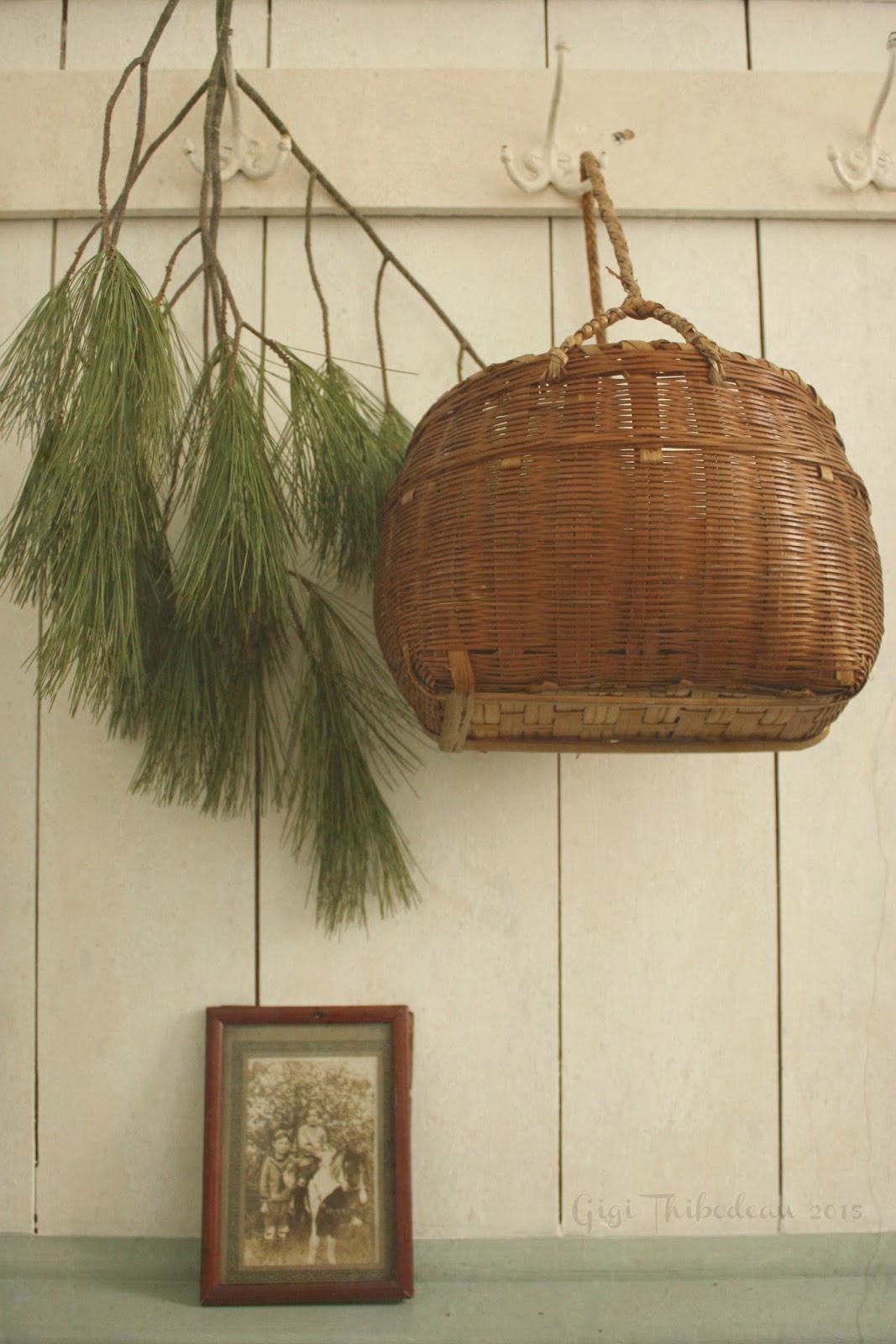 I wasn't afraid then and I wasn't afraid last night.  Both times, the oracle had given me but one possible future, and as my cat curled the yin of his legs into the yang of his belly on the pillow beside me, I fell into a deep sleep to dream of the squirrels who live in the pine, their nest rocked and tossed like a boat on a stormy sea. 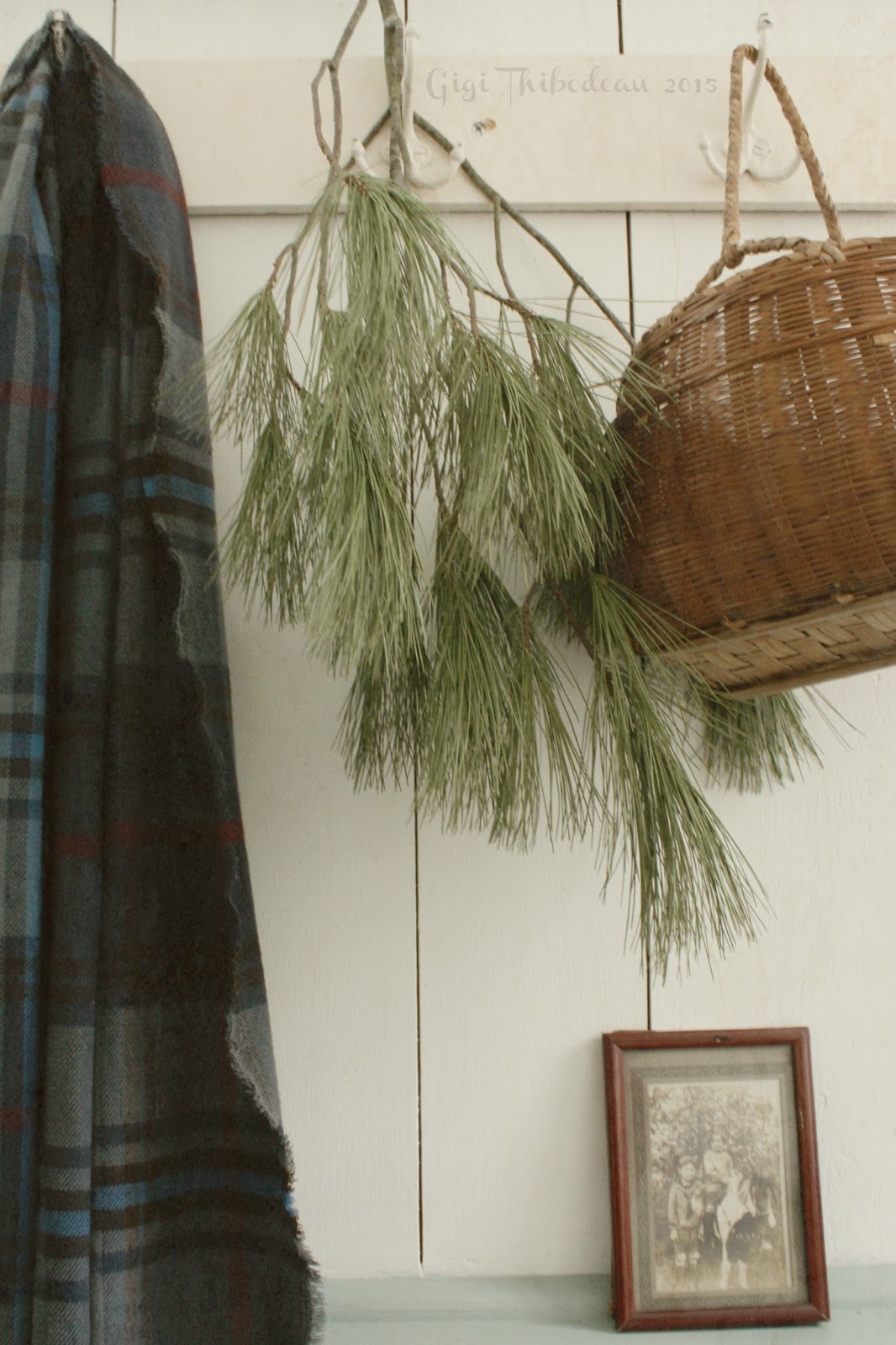 This morning I opened my eyes to white sunlight.  The wind had died, but I was alive. Downstairs in the kitchen, the cat cried for his bowl.  The radiator awoke with a knock and a hiss, and I heard my husband's feet shuffling from cupboard to stove to sink.  We were all here just as we'd been thousands of times before.  There was toast to be made and juice to be drunk.  As I passed by the window on my way down the steps, I glanced out at the ancient pine.  A small branch or two had fallen in the night, and a few dozen gnarled cones littered the lawn, but the tree seemed unfazed by the storm.

Beneath it, the squirrels raced to gather black sunflower seeds and dried corn.  The day's work, and its joy, had begun. 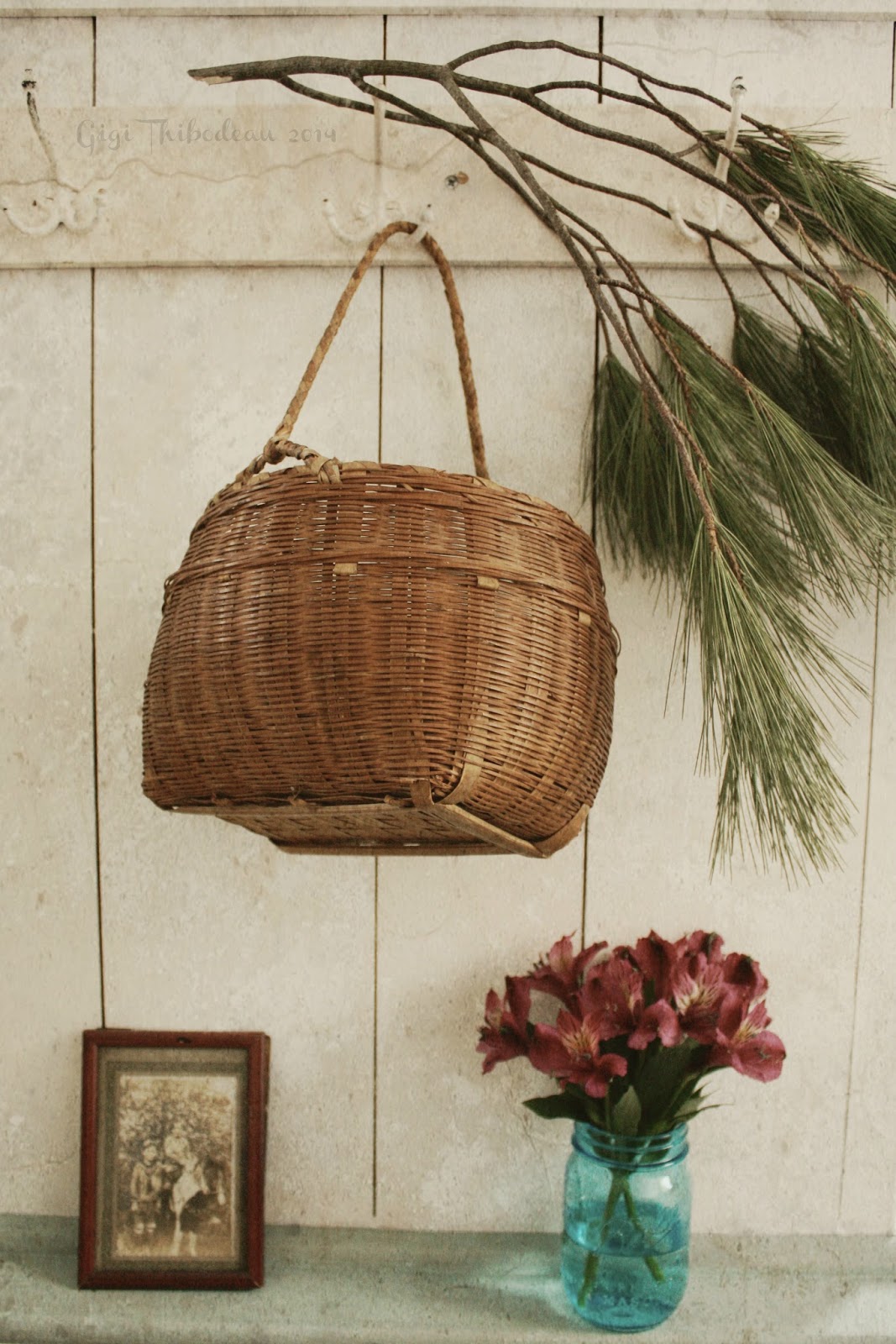 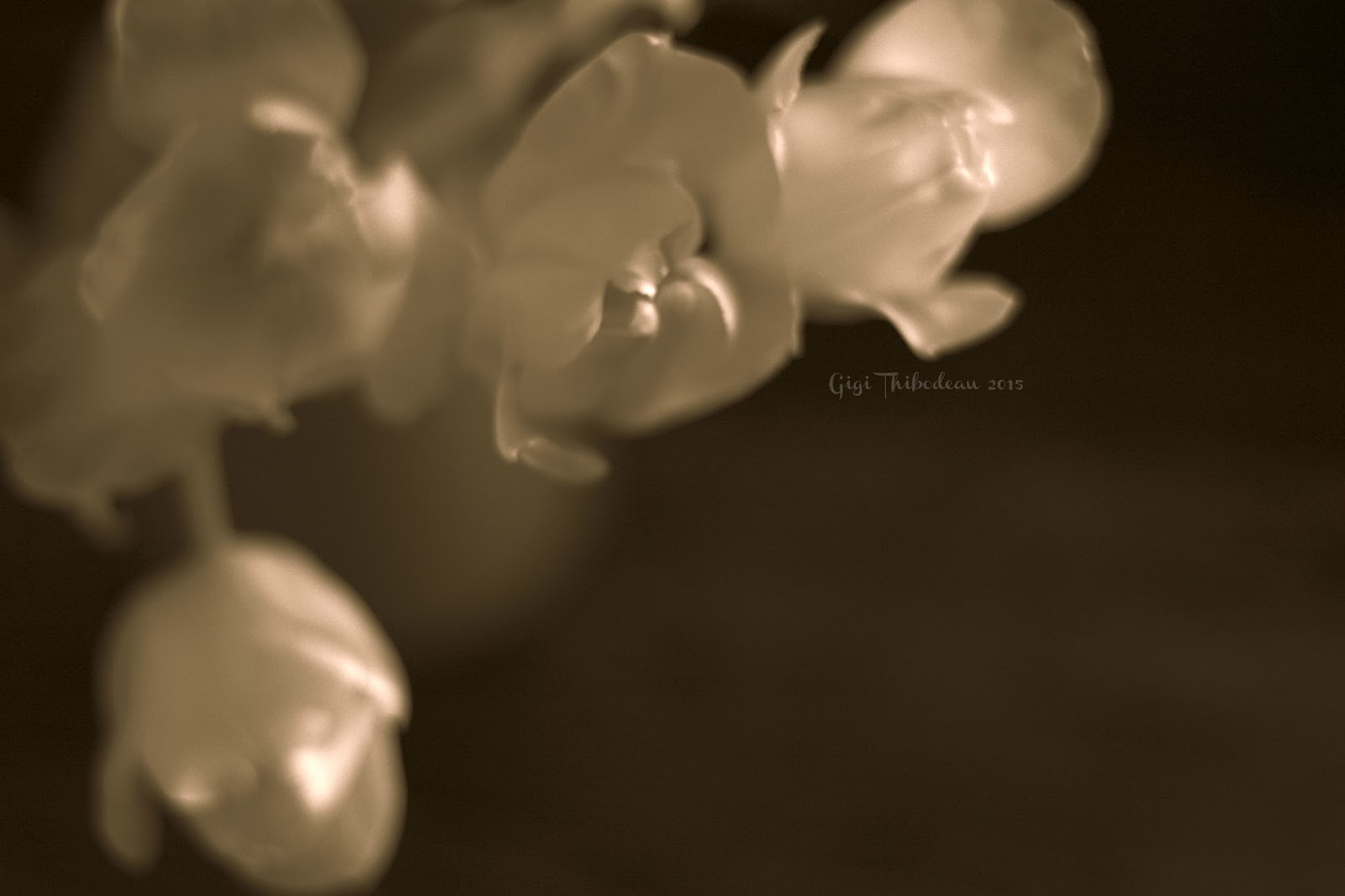 Hello, my friends.  Sorry I've been so absent for the last two weeks.  I had intended to write a post about a quick trip to New York that Mr. Magpie and I took, but I found myself at a loss for words for several days in the wake of the terrorist shootings at Charlie Hebdo.  Like all of you, I was horrified and saddened.  Nothing I wrote felt like enough.  I needed to be quiet and to think.  So many were  writing words and creating images that spoke out powerfully against terror.  I read their words and shared images across social media with friends and colleagues.  The experience confirmed to me that my word for the year, "see," had been a good choice. 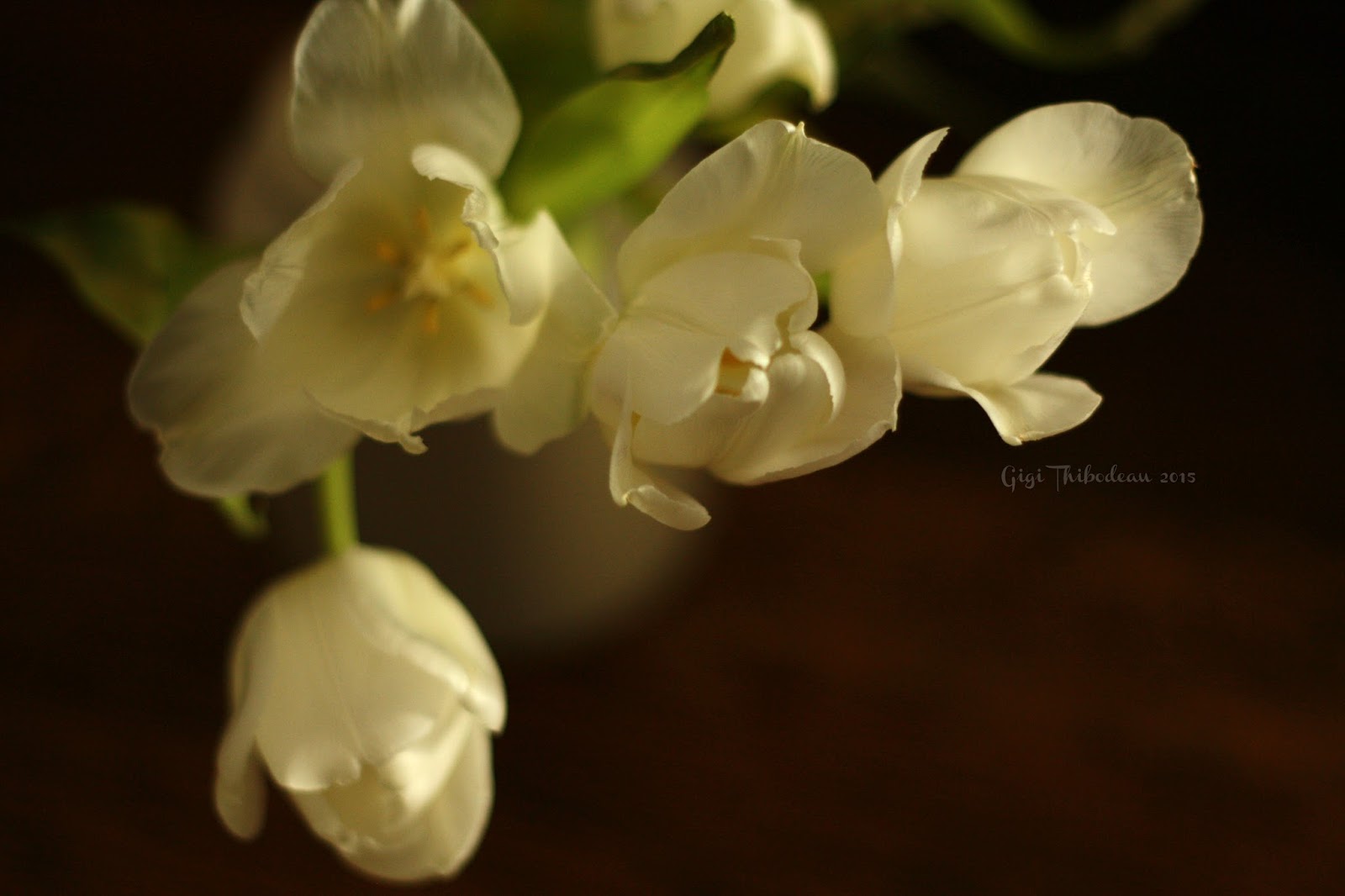 And then yesterday morning I began taking Kim Klassen's Be Still--Fifty-Two class.  These photos are my response to her first lesson.  I can't begin to express how grateful I am to be taking the class and to be focusing so intently on being still.  The world feels like a wild place both close to home and thousands of miles away, and to spend a little time each day being quiet and still is a blessing. 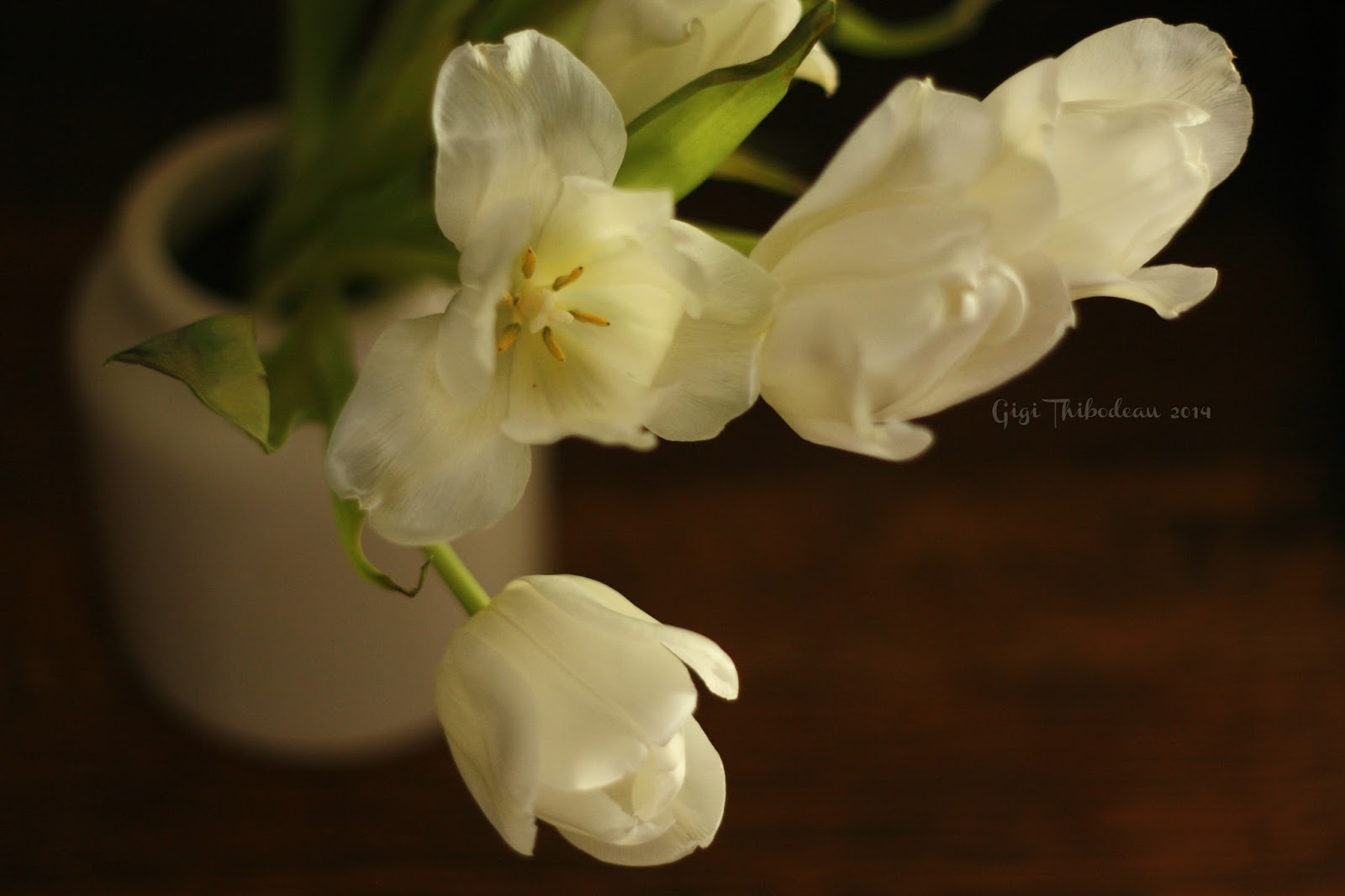 I am giving myself several challenges this year, each one of them a gift in its own way.  Sometimes discovering the clarity one needs to take the next step is more difficult than taking the step itself. Which way to go?  How far?  What lies around the next bend in the path?  I could stay frozen with worry forever. 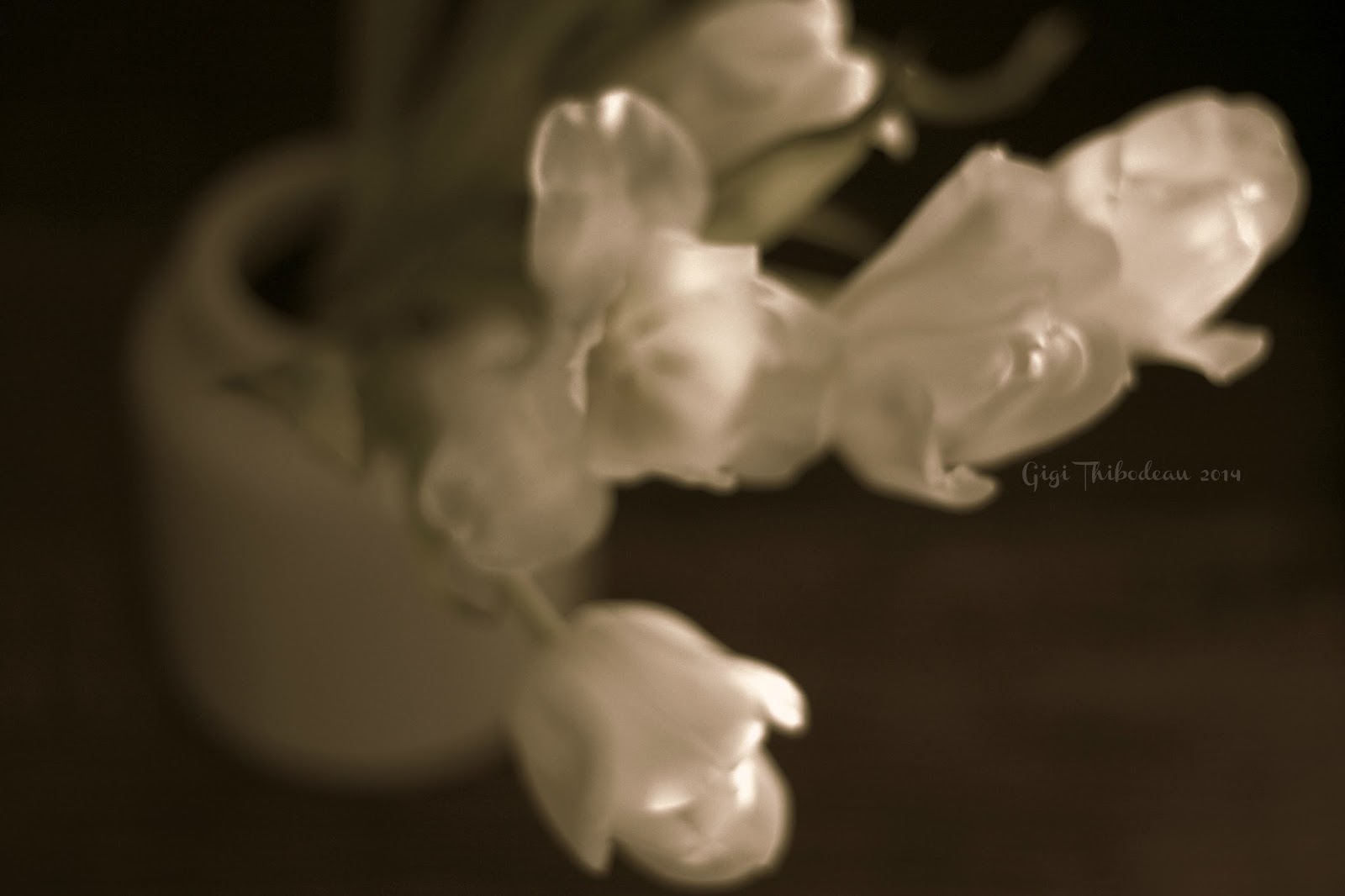 And so, I'm teaching myself to understand the difference between simply worrying and actually doing the kind of thinking that creates clarity.  I don't need to see all the way down the path.  I just need to see a step or two ahead of me to be brave enough to keep going.

Sending warm thoughts and thanks to you today.  Thanks so much for stopping by.  xo Gigi 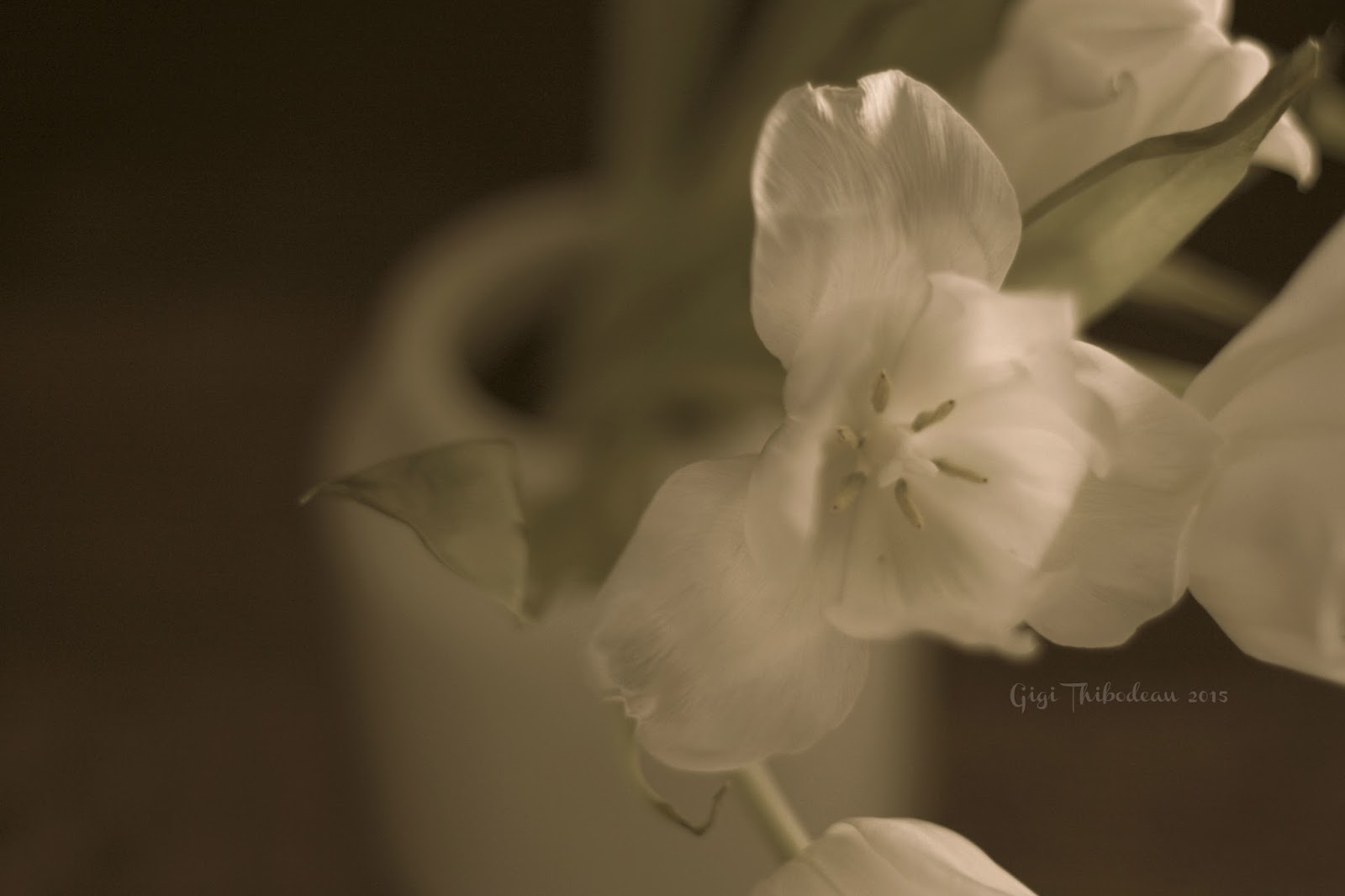 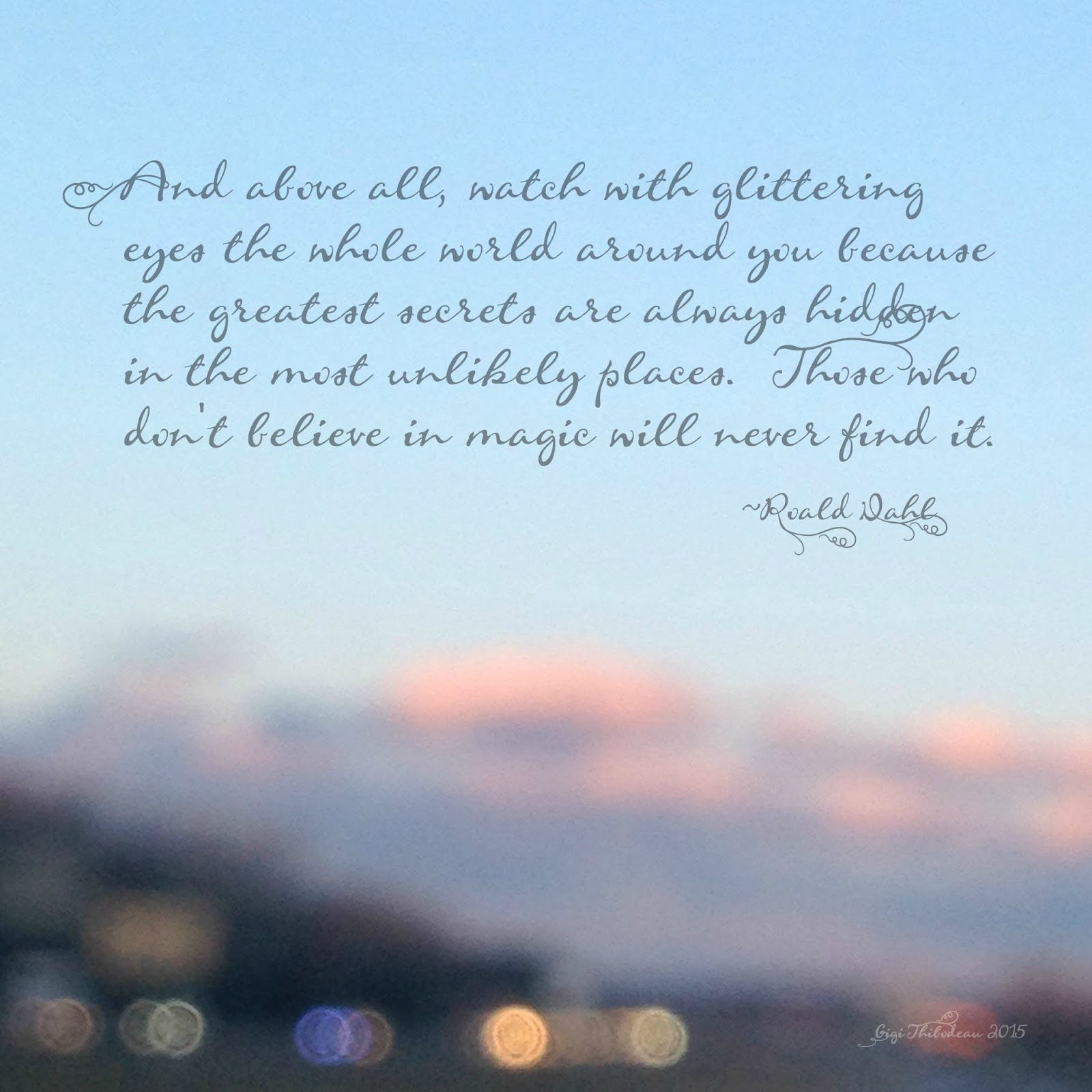 A Year and a Word 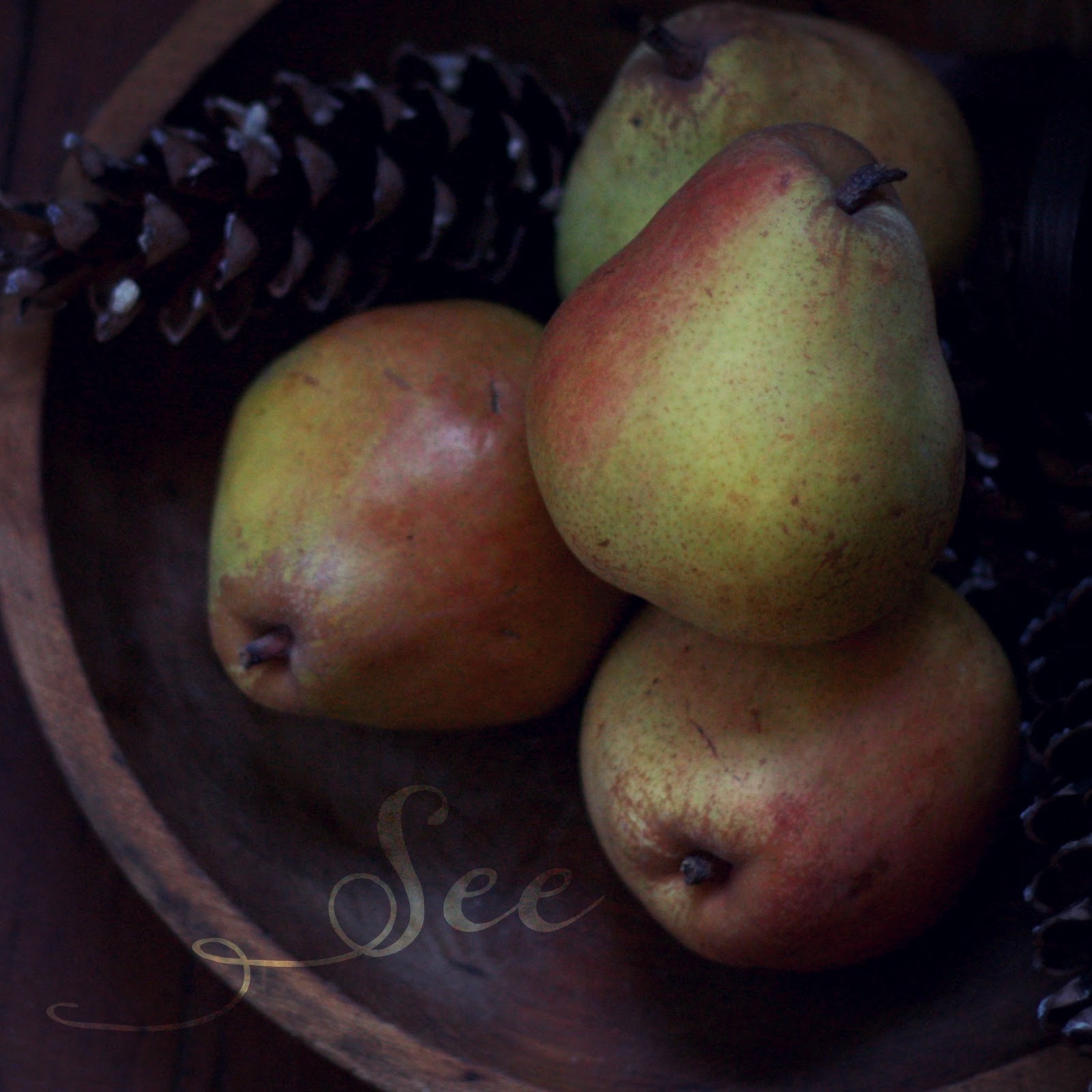 My word for 2015 is see.  Of all my senses, I am most inspired by sight, which is a bit ironic, I suppose, since I have weak eyesight, both near and far.  If you were to watch the steps I need to take to set up and shoot a simple photo like the ones of these pears, you might wonder why I bother.

And yet, I cannot imagine my life without photography or gardening or design.  My writing process is also profoundly influenced by imagery, whether I'm crafting a poem, an essay, an article, or a piece of fiction.  A good sentence begins for me with an image and moves from there.

I'm grateful for the technology that lets my weak eyes see, and I never take it for granted.  I chose this word for 2015 to remind myself to use my eyes, my mind, and my heart to really see, to take in the play of light and shadow through a lace curtain on a summer afternoon or the rough and nobbled grain of the wood on an old farm table--to see things as they are, on their own terms.  And this goes for people as well as things . . . and animals, too.  I want to foster in myself a greater sense of empathy for others and for whatever journeys they may be on. 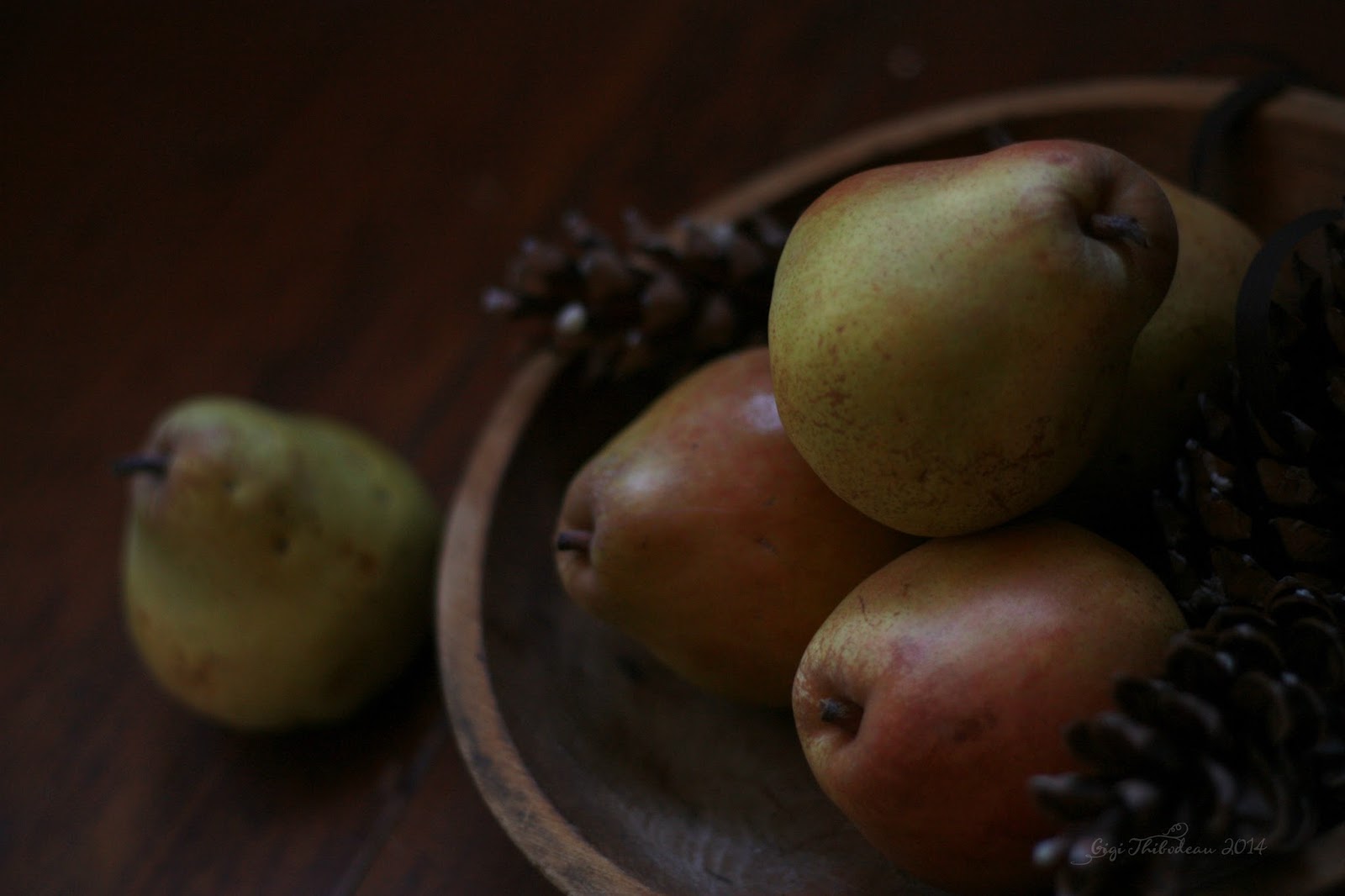 I have a full year ahead in my work life as well as my home life, and I know that truly seeing will require me to stop and take long stretches of time.  I am often good about guarding and using my writing time to its fullest, but I need to be better about sitting still and being quiet just to simply see. This will make me a better artist, a better writer, and, I hope, a wiser and richer me.

I gave myself the gift this new year of signing up for a still life class with my dear friend Kim Klassen.  Kim is one of the most inspiring people I know, so if you are looking for some creative inspiration in 2015, take a peek here.  For me, Be Still--Fifty-Two couldn't be a more perfect way to take that time I need to see.

Have you chosen a word for the year?  If so, please feel free to share it in the comments.  I'd love to learn what word you've selected and why.