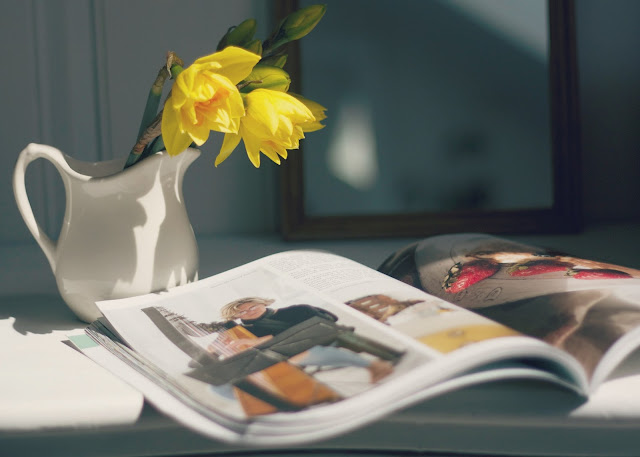 I've been meaning to post some especially lovely news here, my friends.  This month I have the tremendous pleasure of sharing the pages of Mingle Magazine with several of the incredible women who attended Finding Stillness 2015.   We wrote a collaborative feature about the time we spent together, taking photographs, going on hikes, sharing meals, and just finding time for our creative selves at Kim Klassen's The Studio in Rivers, Manitoba.  If you've read my blog post about it, you know what a transformative week it was for me, so to get to work with my photographer friends on this piece for Mingle was pure joy.  I was especially excited that I got to spend a lot of time with Diana Foster to edit the text and gather the photos for the piece.  She is a consummate professional, but she's also sweet and smart and down to earth, and I felt so lucky that we worked on this project together.

I hope you are well, and that every single day finds you doing something you love--even if only for half an hour, but hopefully for longer.  I am finishing up a semester with my writing students over the next couple of weeks, which is bittersweet for me, because this has been an especially productive and exciting semester.  Watching my students' work grow and develop is always rewarding, but this time around has been especially magical.  I feel privileged to witness and be a small part of their creative journeys.  Besides teaching, I've got several photo and writing projects in the works, which I'll keep sharing with you, of course.  And I'm just getting back out into the garden, so there will be photos galore coming soon of new plantings and spring beauties as they begin to emerge.

"Keep some room in your heart for the unimaginable." ~Mary Oliver 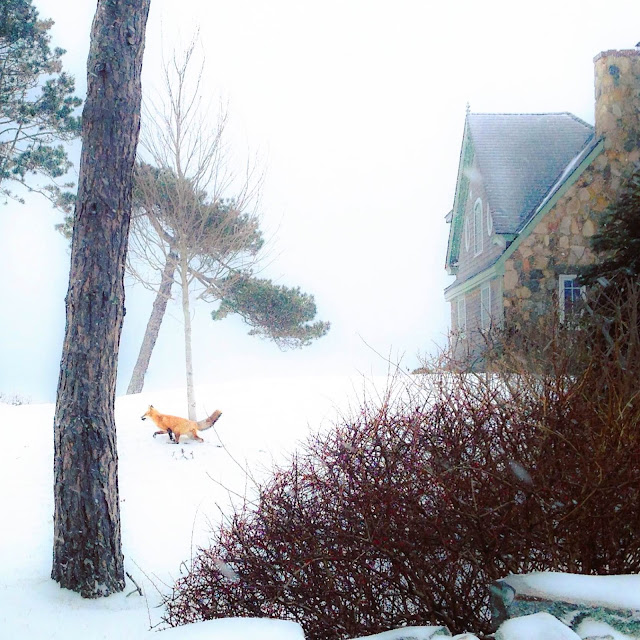 I'm happy to be back with my March 5 on 5 post!  Even though I shot and processed a ton of photos this past month, I felt myself drawn to these shots I took during a very unexpected snowstorm here on the coast at the beginning of the month.  Todd and I were headed south to Boston for the day, and the blizzard came on so fast and furious that we decided to cancel our plans and just hang out here in southern Maine instead.  It ended up being a fairy tale snow globe of an afternoon during which we spotted this fox carrying his lunch of a wee mousie across the snowy lawn of a grand old home by the seashore. 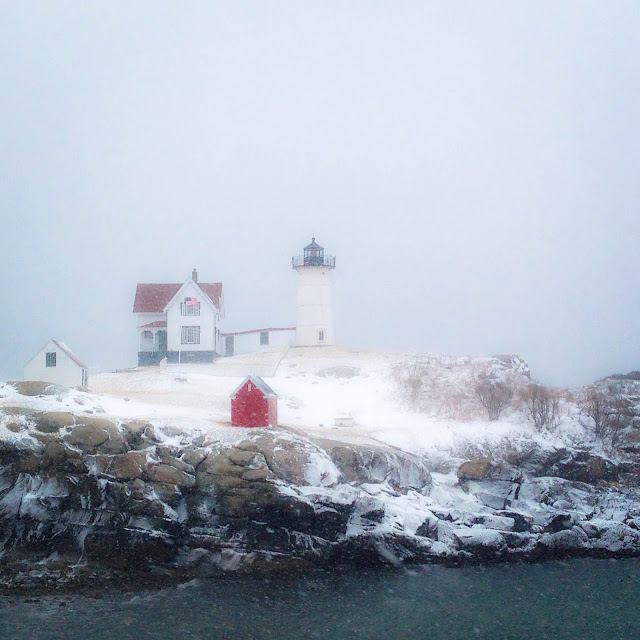 This shot of Nubble Light in York looks peaceful enough, but I cannot tell you how bitterly cold and windy it was!  I was nearly blown into the water getting the shots above and below.  In the lighthouse photo I know that the water looks peaceful, but that's just my crop.  The shot below is literally what was going on just a few yards away.  I stood in the same spot for both of these pictures, just turning my body slightly.  I've actually never come so close to being hurt while taking a photo. 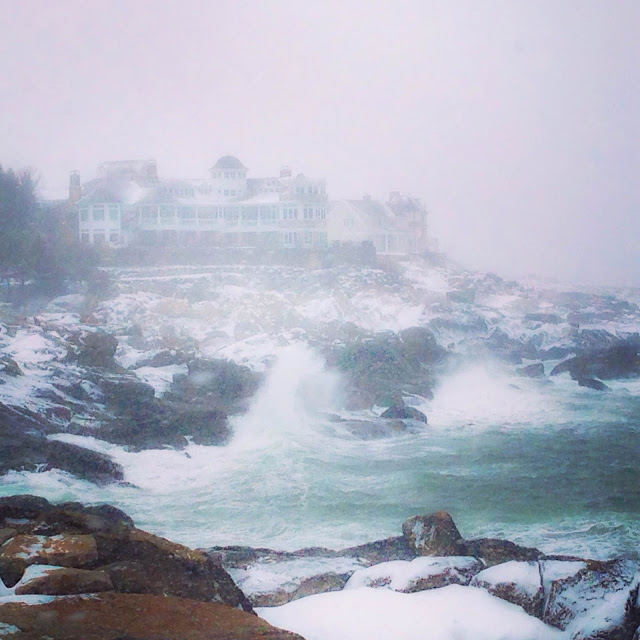 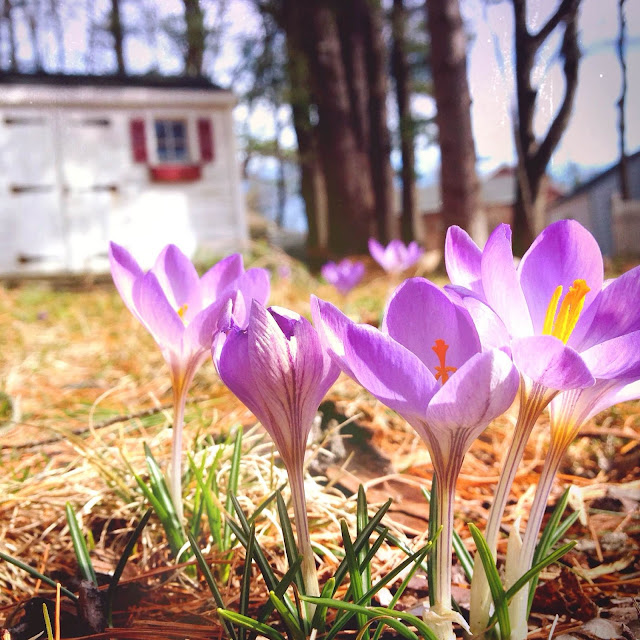 We had a beautiful thaw immediately after this storm, complete with crocuses blooming in our yard, trees budding, grass greening, and the tulips and daffs beginning to poke through the soil.  Then today, April 4th, we woke to 16 degrees Fahrenheit and another snowstorm.  I took a short, again very chilly, walk through the West End Cemetery here in Portland after lunch, stopping to pay a visit to one of my favorite gravestone, this beautiful willow marker of Dorothy Abbot.  The West End is the most gorgeous neighborhood in Portland, full of late 19th-century homes, many of them built after the Great Fire of July 4, 1866, which destroyed much of the city.  We are fortunate today that much of Victorian Portland still survives.  A stroll through the stunning West End down to the quaint Old Port still gives one a strong sense of what this seaport must have felt like in the 19th century. 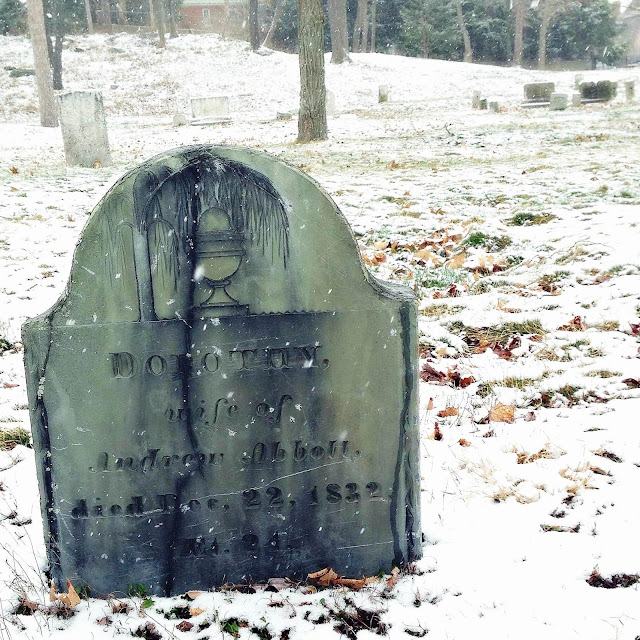 If you'd like to see more 5 on 5, head on over to this post by Leanne Godbey Hymes.  I hope you're well, my friends!  I'll be back soon, hopefully with much more spring-like photos and thoughts to share.  xo Gigi