Just Sit There and Look Pretty 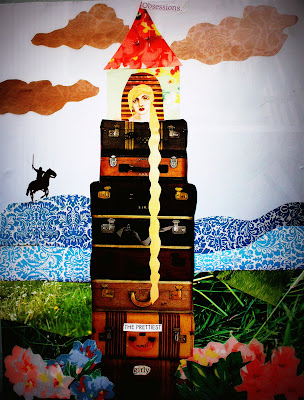 Debi at Emma Tree has offered a challenge to respond to the phrase "Just sit there and look pretty."  As soon as I read her challenge I knew I had to participate, because pretty and I have a troubled past.
I don't think I am unusual.  Pretty is something I have alternately rejected and longed to be.  I have allowed my self esteem to be bound up in pretty.  Smart and funny and creative and caring are in there, too, but they don't cause me nearly as many problems as pretty.
In a few weeks I'll turn 43, and what do I think of pretty as I introduce her to middle age?  Well, I don't think they'll get along very well either, but I'll tell you one thing, smart and funny and creative and caring just keep getting better and better all the time. 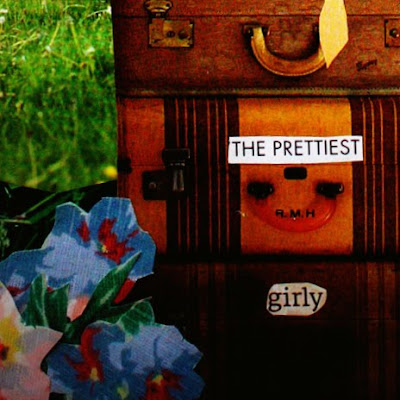 In response to Debi's challenge I decided to make a paper collage, and as I cut and pasted, this image of Rapunzel emerged from the clippings and flowery bits.  I have long studied and taught the history of fairy tales; they are part of who I am.  Like many girls, I was raised on them.  Of course, in the 70's there were far fewer Disney versions, so I actually read many, many fairy tales from books.  These days there are countless new versions of tales, including the retellings that are meant to empower girls rather than make them feel like damsels in distress. 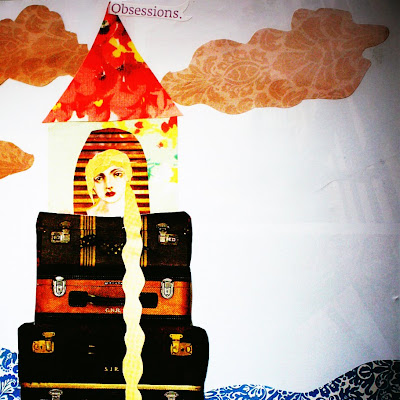 And yet, the old tales persist.  In some, the female protagonists were actually quite powerful, but in others, like poor Rapunzel here, they were passive characters around which everything revolved.  Rapunzel just sits in that tower day after day, letting her long golden braid down for the evil witch to climb.  Eventually the prince discovers her and shimmies on up to her tower, but Rapunzel's job throughout the story is to sit there in the tower (and then later in the wilderness) and look pretty.  She is rewarded for all the pretty sitting with a happily ever after of her very own.
I recall many Rapunzel nights in my youth, sitting by the phone (which was, of course, attached to a wall by a cord, so I might as well have been in a tower) for some prince of a boyfriend to call.  In fact, I remember an awful lot of time in my youth wasted on wanting to be prettier.  And now that I'm heading into the age when I could be labeled a "cougar" or a "matron" or some other equally ugly tag depending on how I choose to dress, I still waste time and money on special creams and lotions and potions to make me appear youthful.  Maybe I no longer identify with the young heroines of fairy tales.  Maybe now I am the evil queen in Snow White, asking my mirror who is the fairest of them all, whipping up concoctions made of roots and leaves and spider's legs.  Which leads me to this question: notice how the older women in so many (but not all) fairy tales are depicted as evil while the young girls are good?  I think this has everything to do with power.  We are not evil; we are powerful, and that can be frightening, even threatening to others who would like us to sit there and look pretty.
As women age, we become forces of nature, full of wisdom and strength.  No tower can contain us, no king can control us.  We are the makers our own ever afters.
Go check out Debi's amazing blog for links to others who are participating in this challenge!  xo
Posted by Gigi Thibodeau at 10:12 AM