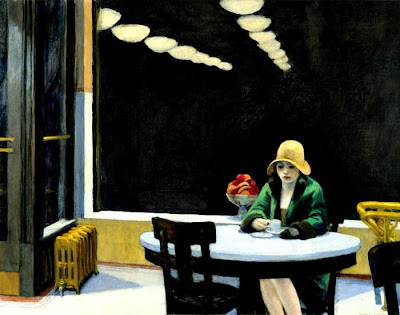 Edward Hopper, "Automat"
All weekend, in between hockey and sliding and ferry rides and gummi bears and yo-yo's (our nephew was here for the weekend :) ), I was thinking about words and images, images and words.  Photographs came to mind, but paintings, too.  Mostly paintings.  I'm an Edward Hopper girl.  One of my goals in life is to write a Hopper painting.  If you're a little bit of a loner like me, and you're stuck for inspiration for the Picture Exercise, perhaps you might Google Edward Hopper and see what happens. 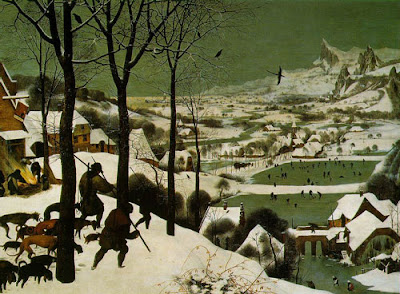 And remember the above painting?  I offered it this past Friday as possible inspiration for the Picture Exercise, and then over the weekend we took our nephew sliding on the truly monumental hill in our neighborhood.  I suddenly felt like I was in a Bruegel painting myself: 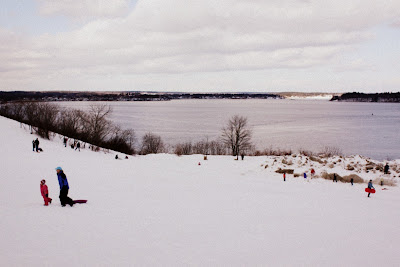 I edited this photo to give it a grainier, colder, and blurrier mood than the original shot, but it was a rather uncanny feeling to watch all those people moving against that stark landscape and those bare trees.  And, yes, that's the ocean at the bottom of the hill.  It only feels like you could slide right into it.  There's a large snowbank that stops you, thankfully.
I've had emails from several people who are doing the exercise, and it sounds like it's going well.  A couple of people even shared their own inspiration photos.  This first one is from Sarah.  She took this evocative photo in Yvoire, France: 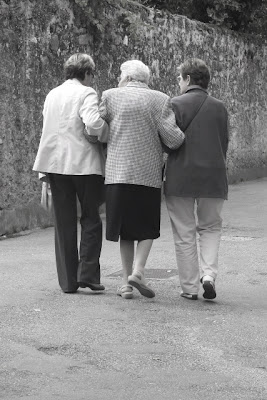 And Diana-Marie sent this one, which she took in Brunswick, Maine, at the Joshua Chamberlain House. I love the idea of an inspirational photo that has no people in it, but that does have a dramatic architectural element to help create an interesting setting. 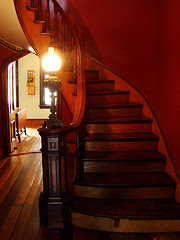 As for me, I think I'll spend at least a part of tomorrow catching up on my own writing in a little coffee shop.  Too bad there's no more Automats where a lonely girl can go.
Posted by Gigi Thibodeau at 6:17 PM