No matter how I arrive in Greenwich, by boat or by land, I am charmed every time.  This London borough on the Southeast side of the Thames has become a place that makes me linger far too long in front of the windows of local realtors, staring at all the listings that I will never be able to afford.  Can you blame me? 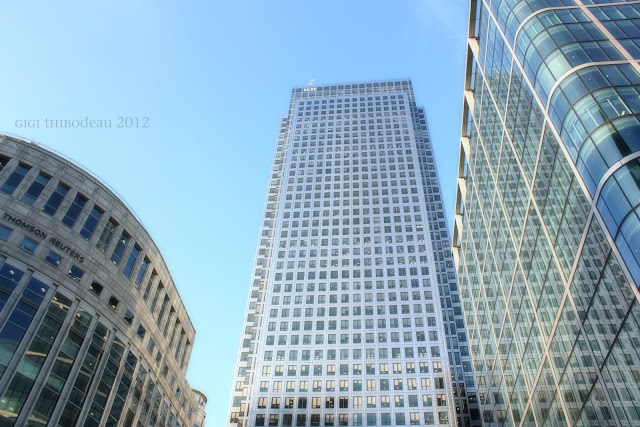 We stayed in Greenwich several nights during this last visit to London, and I do believe it was my favorite trip of the last twelve years.  If you've spent any time in London, you are accustomed to taking the Tube and "minding the gap," but most tourists never ride the Docklands Light Railway (DLR) in East London (a fact that will change this summer during the Olympics, most of which will take place in East London).  The DLR is almost as wonderful a way to get to Greenwich from central London as the river boats.  Nearly the entire trip is above ground, high in the air.  The tracks sweep you through the glittering skyscrapers on the Isle of Dogs before shuttling you under the Thames.  Once you reach the south side of the river, you emerge at the Cutty Sark station beside that famous, and now restored (at least they plan to have it finished in time for the Olympics), 19th-century clipper ship. 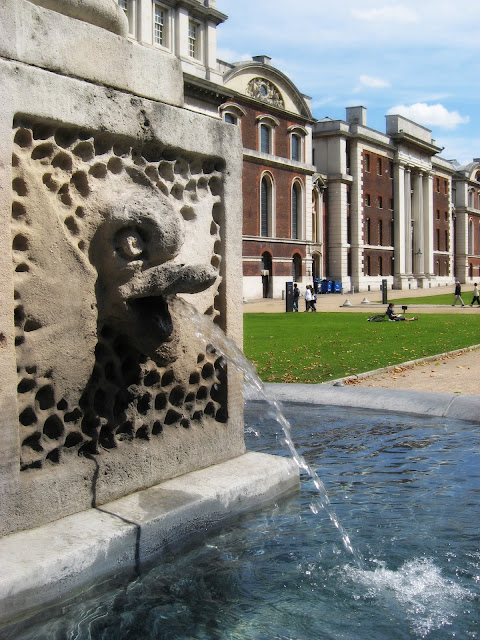 And what you find in Greenwich is a mix of glorious architecture, parks, markets, and shops.  It's a place steeped in history, but very much thriving in the present day.  If you're in London and feeling overwhelmed by the city, a trip here will calm your nerves. 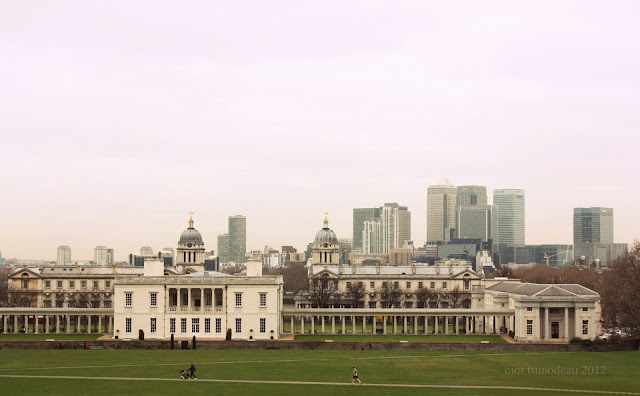 The view above is one I snapped early one morning from Greenwich Park looking back over the Old Royal Naval College and across the Thames to Canary Wharf and those glittering buildings that you travel through on the DLR. 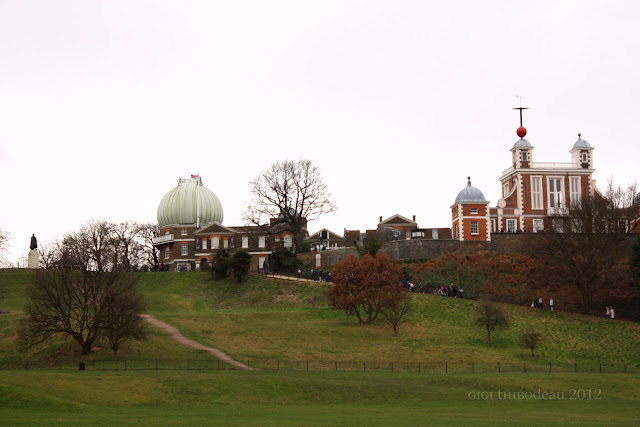 Greenwich Park is home to the Royal Observatory and the Prime Meridian.  If you climb the steep hill to the top, you are rewarded with the chance to stand in two hemispheres at once.  It makes for fun photos!  The Observatory was founded in 1675 by Charles II as an institution for navigational research.  I love the museum here.  A little side note: if you want to read an interesting story about how an 18th-century clockmaker named John Harrison discovered the way to determine longitude at sea--and how this discovery transformed navigation--I recommend a book by Dava Sobel called Longitude.

If you're not fascinated by clocks and navigational history, the park itself is fascinating and incredibly beautiful.  Rarely have I ever seen so much wildlife in an urban parkland.  In addition to the herd of deer that makes its home here, there are foxes and loads of other animals (including the hundreds of dogs and their owners who walk here every day), as well as dozens of wild bird species.  The pathways are lined with 400-year-old sweet chestnut trees.  My favorite part of the park is the large, enclosed flower garden (no dogs are allowed here), where we found hundreds of camellias blooming. 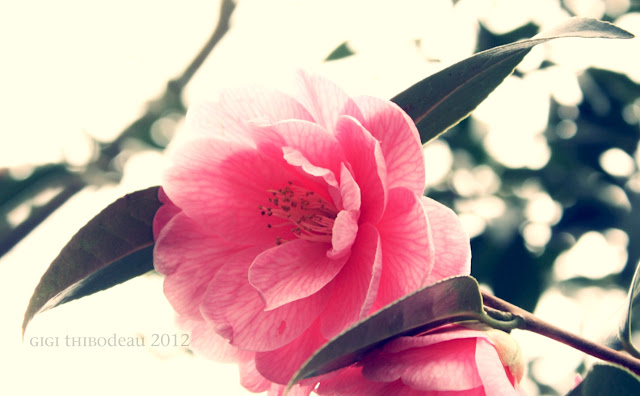 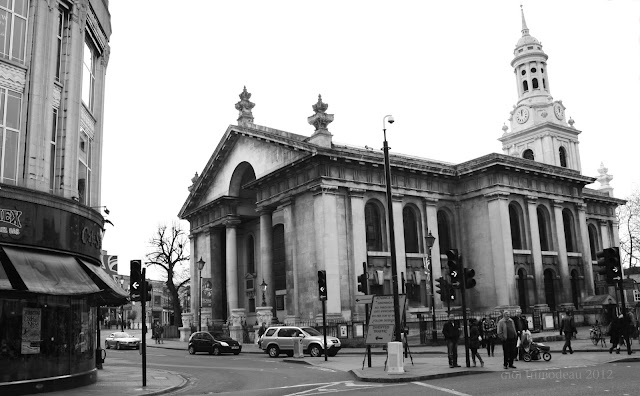 Situated in the heart of the borough is St Alfege Church.  A church has stood on this site since 1012 when Alfege, the Archbishop of Canterbury, was martyred here by marauding Vikings.  The current church was designed in the early 18th century by Nicholas Hawksmoor, a pupil of Sir Christopher Wren.  I couldn't resist processing the photo above in b&w to feature the beautiful lines of the structure. 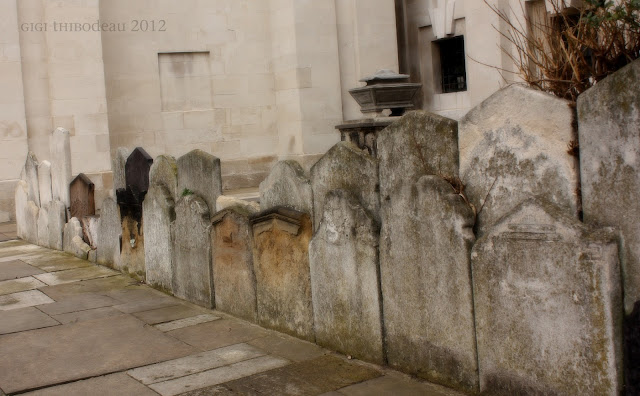 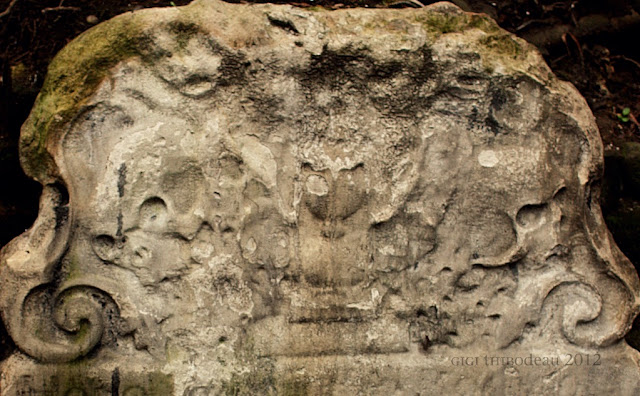 The Churchyard at St Alfege is a perfect place to go for peace and quiet. 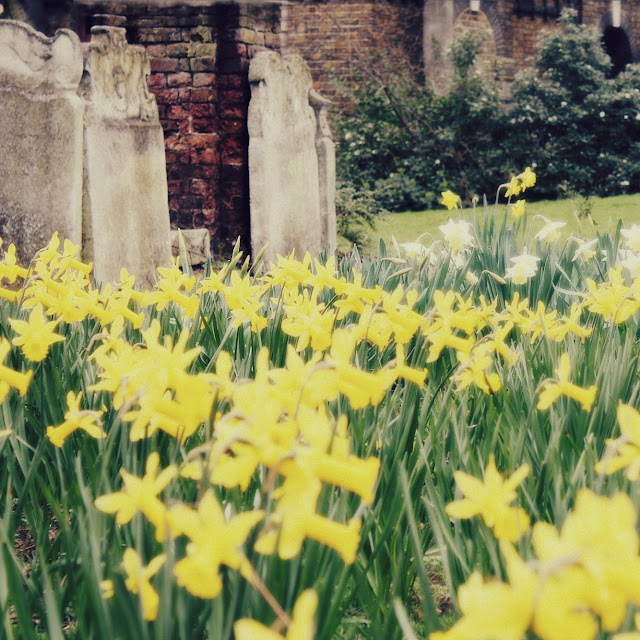 Perhaps the best and most memorable part of traveling for me is meeting new people.  On this trip, a real highlight was meeting our innkeeper, Julia.  We stayed at a wonderful little place called Number 37, and we looked forward to talking with Julia each morning at breakfast.  When we arrived on our first day after a long, sneezing and wheezing flight (remember my crummy cold) followed by a considerable trek across the city by Tube and DLR, she greeted us warmly at the door, saying, "You both look like you need a cup of tea."  Indeed, we did, and it was one of the best cups I've ever enjoyed, followed by a long nap on an exceedingly comfortable bed. 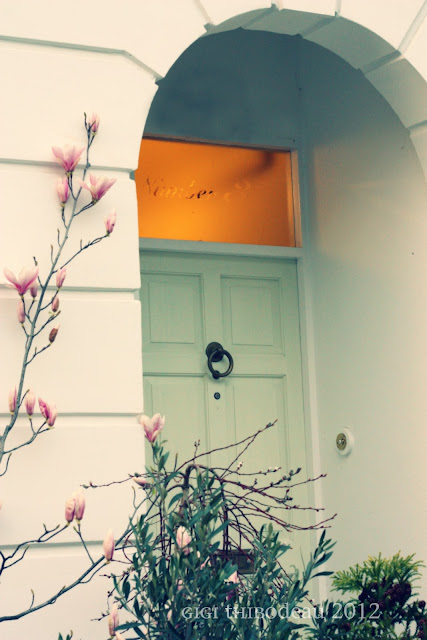 Our room opened out to a sweet little garden where the daffodils and camellias were blooming.  As I've mentioned before, I don't need luxury when I travel, but hospitality, comfort, and convenience are absolutely necessary in my book.  This inn exceeded my needs and expectations on all counts. 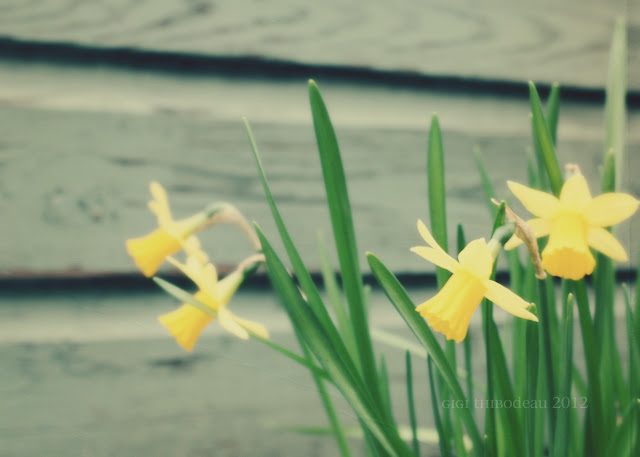 If you like to wander through streets filled with character and history, then Greenwich is your kind of place. 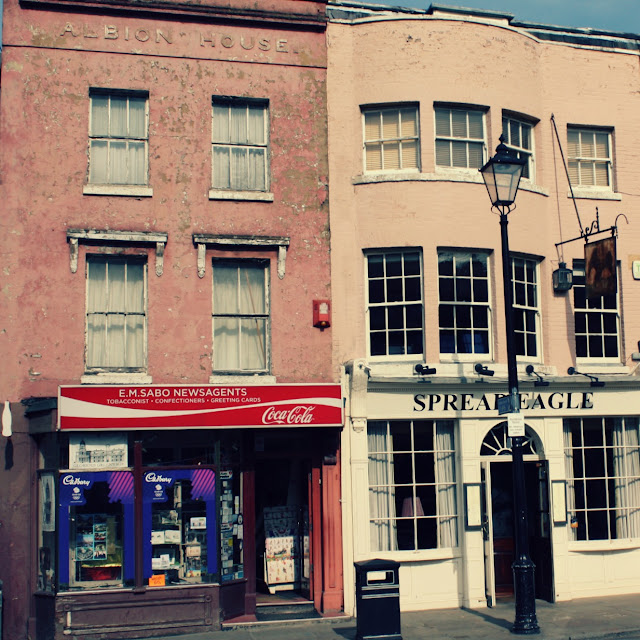 And if you like to shop, you will be in heaven. 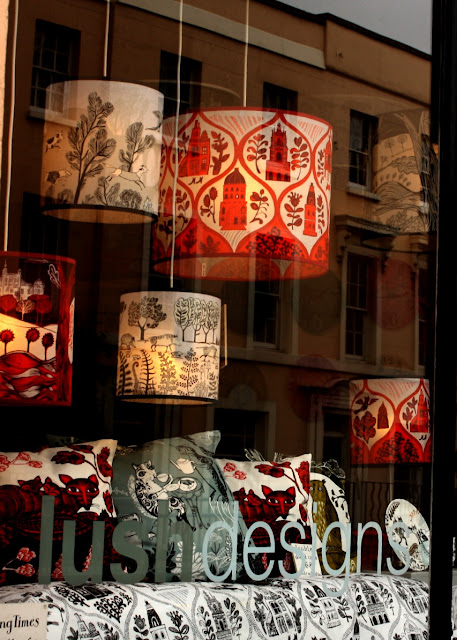 Wonderful local shops by well-known artists and designers, like the fabulous women at Lush Designs, abound.  And I've written before about my love for the designs of Sophia and Matt.  They used to have a stall at Greenwich Market, but now they have a bright and beautiful shop all their own, and yes, I bought more than one lovely bag there.  Another of my favorite shops is Cedarlia. 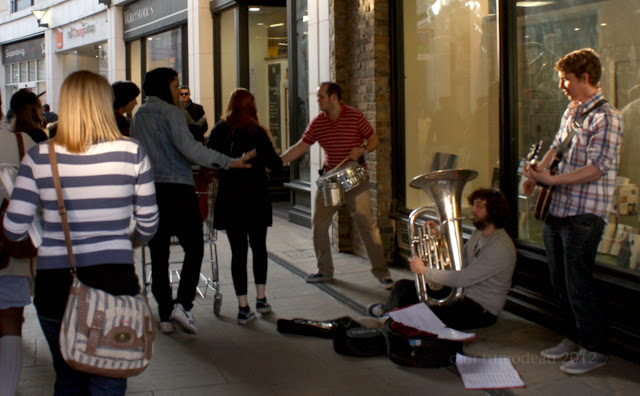 When you're out and about shopping, you'll often find sidewalk entertainment.  These guys were really wonderful.  They did the only version of "Sultans of Swing" I've ever liked.

You'll also find loads of restaurants, pubs, and cafes.  The shot below is silly, I know, but I can't tell you how much I love the rosemary skinny fries at Gourmet Burger Kitchen.  Yes, I know it's a chain, but it's not one we have here, and, well, the rosemary and the potatoes and the fat make for some memorable skinny fries.  I'm just sayin'.  That's a falafel burger in the background.  Sigh. 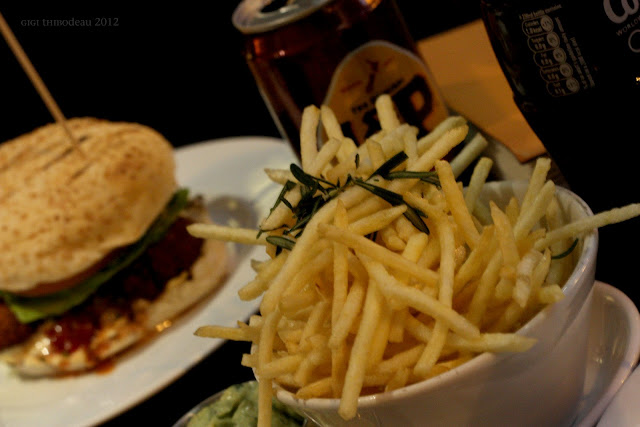 And when you want the most fun shopping experience in Greenwich, head for the markets. 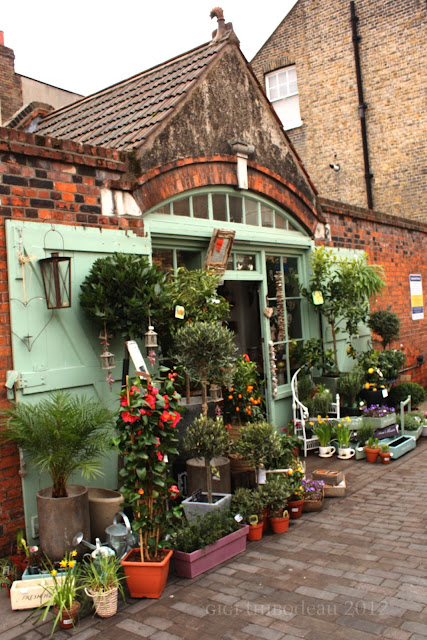 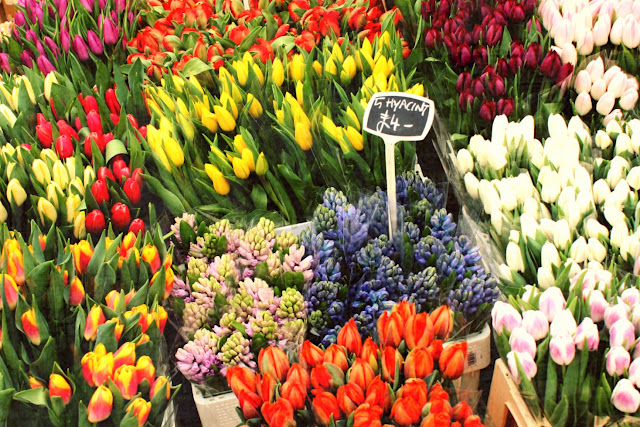 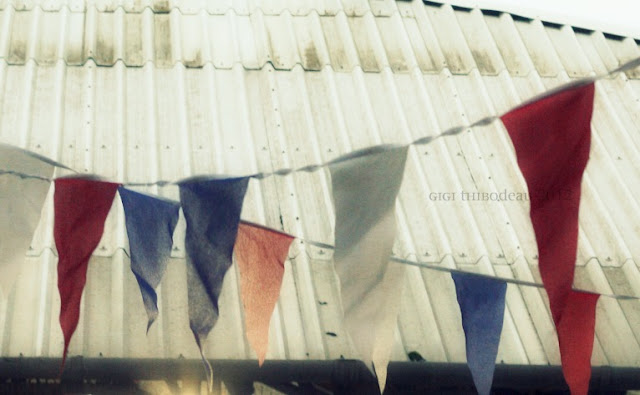 You can read all about Greenwich Market here.  It's one of my favorite markets in London.  The focus here is on crafts, antiques, and foods, and while it's much smaller than Spitalfields or Portobello or Camden, it has a high percentage of quality goods, and since Greenwich has been a market town for hundreds of years, they've had time to get things right.  I love the small weekend market up on the high street, too. 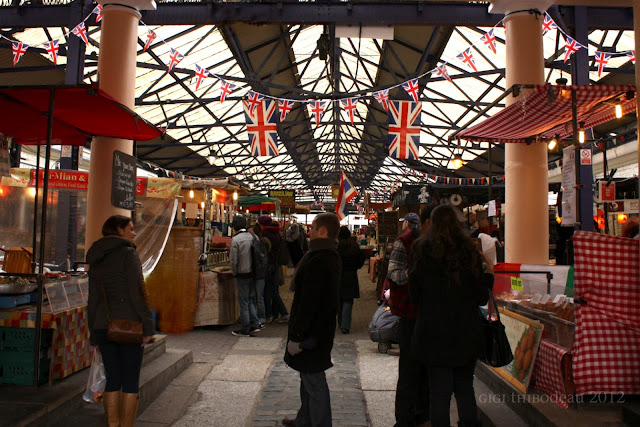 If you're feeling adventurous, you might want to take the foot tunnel that goes under the Thames.  Built in 1901, this tunnel leads you to the north side of the river on the Isle of Dogs. 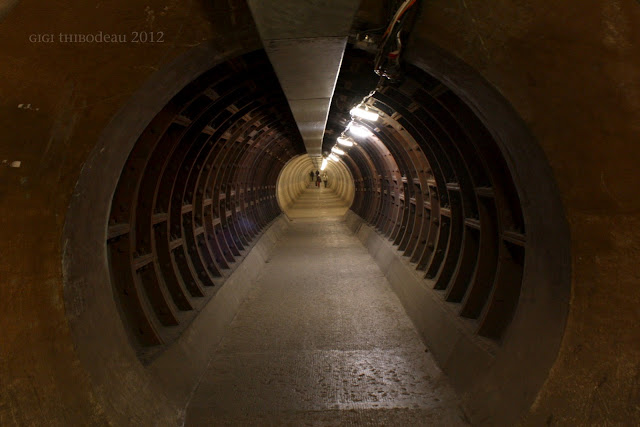 You will emerge at a spot called Island Gardens, where you can look back across the river at the Old Royal Naval College, which was designed by Wren and Hawksmoor on the site of the Tudor palace where Henry VIII and Elizabeth I were born. 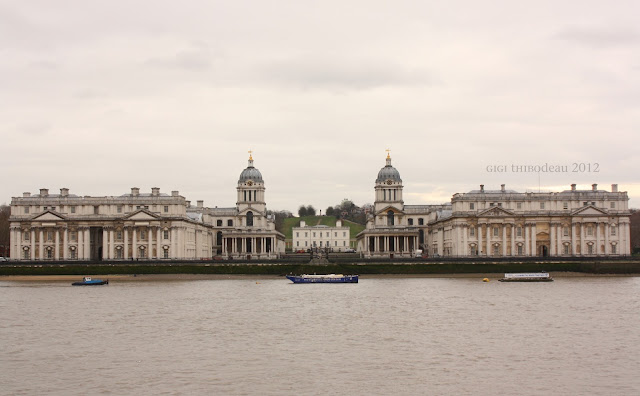 While looking across, you can imagine you are Canaletto in 1752, painting his famous view when the Naval College (which is actually no longer a naval college) was still a hospital (its original purpose).  As you can see, the view remains relatively unchanged. 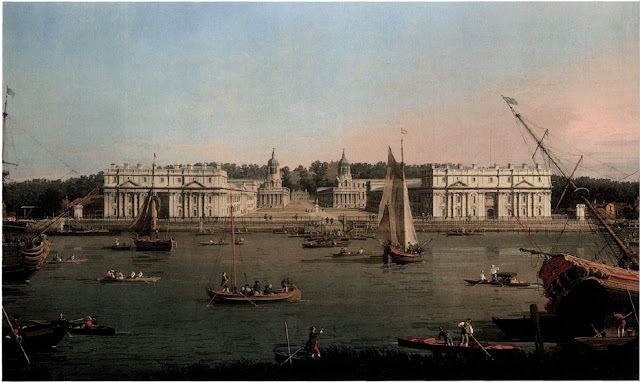 As pretty as Greenwich is during the day, I truly love it at night even more. 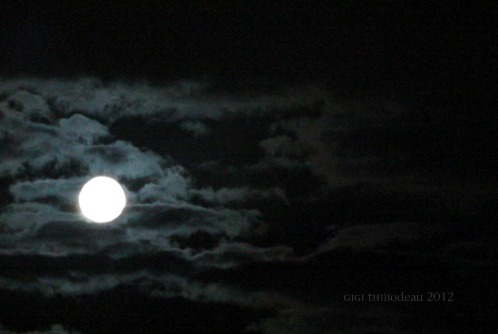 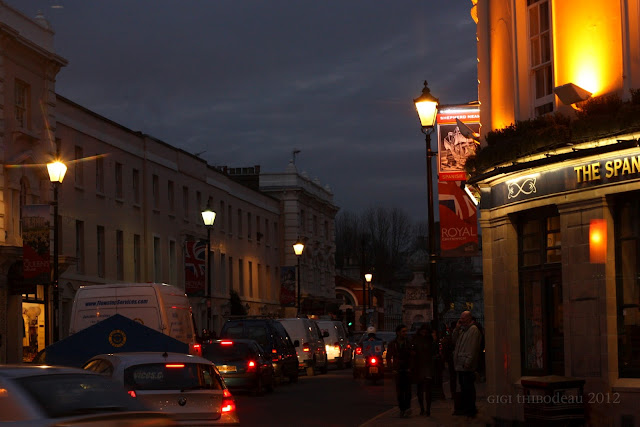 While it doesn't have the frenzy of the boroughs in the center of the city, Greenwich has a bustling nightlife with theatres and plenty of pubs.  The Prime Meridian is lit up in the night sky, and the streetlights cast a warm glow. 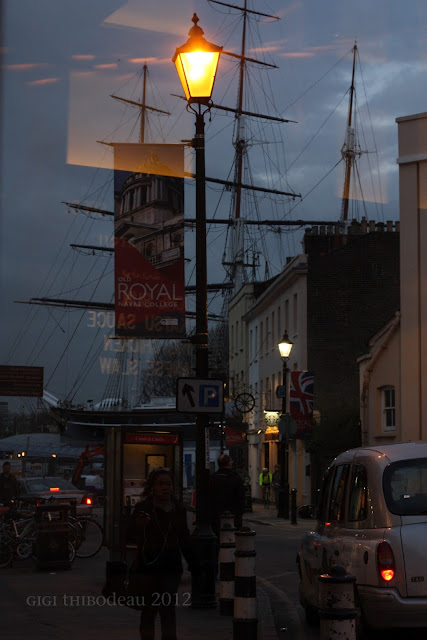 I glanced out a restaurant window one night and snapped a quick shot of the street with the Cutty Sark in the background.  All the reflections in the glass created a palimpsest of past and present, and I felt the life of the city suspended in one moment. 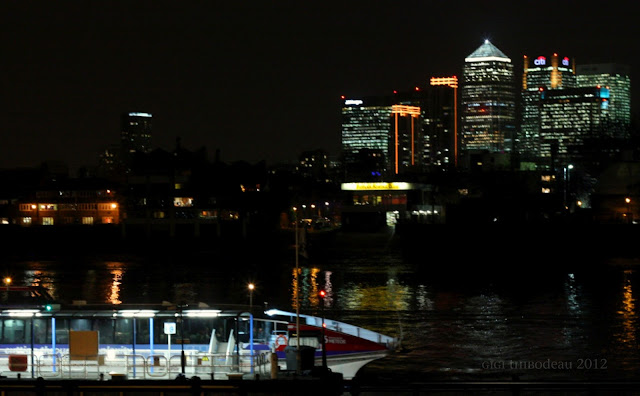 If you travel to Greenwich, take a walk along the Thames at night.  The glittering lights of Canary Wharf will beckon, but you'll be happy right where you are.