Of Worms and Wings and Other Sacred, Ordinary Things 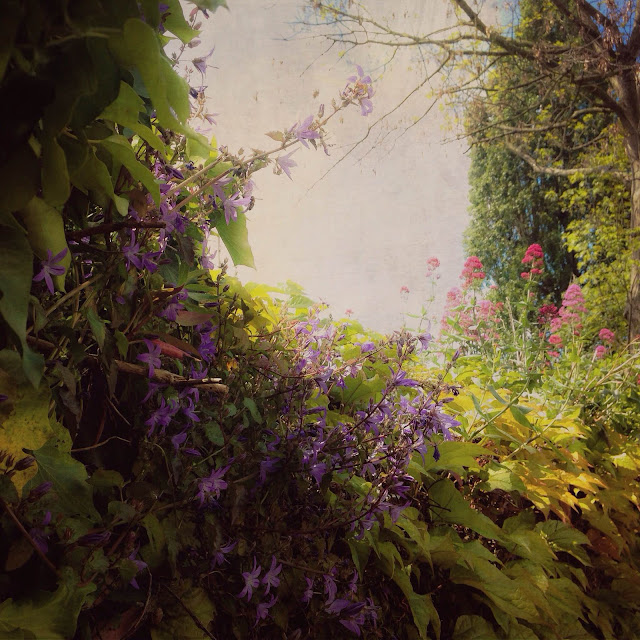 Hello, my friends!  Below I have posted the transcript of a talk I gave this past weekend at a celebration of Emily Dickinson's poetry and gardens.  The event was hosted by the Powow River Poets at the beautiful Old South Church in Newburyport, Massachusetts.  At the end of the day, some folks asked if I'd be willing to share the transcript, and I thought posting it here on the blog might be the easiest way to do just that.  Those of you who read my blog regularly may recognize a few lines here from a post I wrote over the summer as I was drafting this talk.  I've included a few of my photos from past posts here with the talk, too.  Again, if you've read my blog for a while, and you know about my passion for gardens, fields, and woods, you'll immediately understand my love for Emily Dickinson.


Of Worms and Wings and Other Sacred, Ordinary Things

Thank you so much.  I want to say a special word of thanks to the Powow River Poets for this wonderful celebration of Emily Dickinson’s poetry and gardens.   I can’t think of a better way to spend a Saturday--especially an October Saturday--and you’ll see why in just a bit.

I should begin by saying that I’m not an Emily Dickinson expert.  I’m simply a devoted fan, and I have been ever since I was a kid in the 1970’s.  Back when I was about 9 or 10, I had two summertime obsessions.  They weren’t obsessions that I shared with my friends or anyone else.  These were mine alone.

The first was one that I’m guessing many of you also had and probably still have; I read every single thing I could get my hands on. Magazines, books, cereal boxes—if it had words, I read it.  And somewhere in all that reading, I stumbled upon a collection of verse among my dad’s old college poetry textbooks that included some of Emily Dickinson’s poems. And among those poems I discovered the first verse beyond the nursery rhymes of my early childhood that I knew I had to memorize.  It seemed to me so clever and true that I wanted to put it in my pocket and keep it for myself always.  So I did:

“The pedigree of honey
Does not concern the Bee—
A clover anytime to Him
Is aristocracy.”

These lines embody much that I loved then and still love now about Dickinson’s poetry—economy of line, frankness, and a knack for telling the small but significant truth.  In these four lines she captures the perfect symbiosis between blossom and bee—one of the world’s most essential relationships.  This tiny poem has always stayed with me.  When I was learning calligraphy as a teenager, it was one of the sentences I would write again and again, decorating it with flourishes in the curlicued shape of a bee’s flight pattern.  In the years since then, it’s been a mantra, a touchstone that even now I repeat when I’m working in my garden: “The pedigree of honey does not concern the bee,” I murmur as I trellis the sweet peas or weed among the thyme and rosemary, and again at night as I drift off to sleep, knees aching, hair still smelling of mud and leaves . . . “a clover anytime to him is aristocracy . . . .” 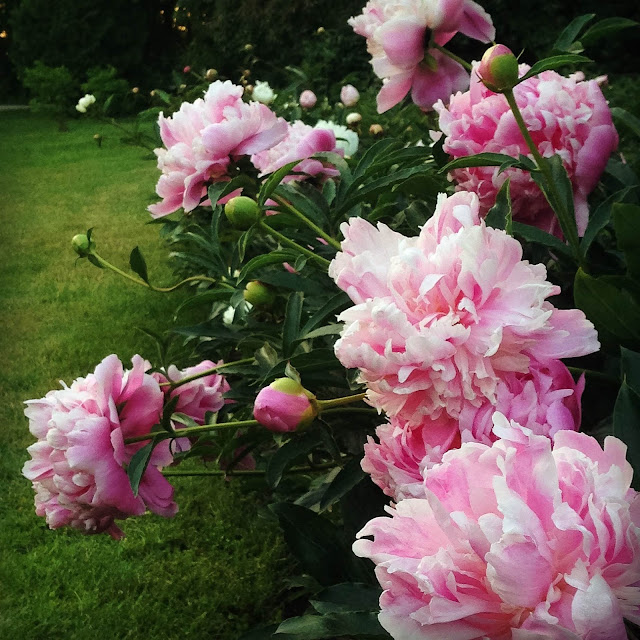 But getting back to my childhood summertime obsessions.  The first was reading, and as you might have already guessed, the second was gardening. I loved spending hours in my mother’s flower garden with my face as close to the peonies, the phlox, and the tiger lilies as possible.  In the garden, my senses were heightened, things seemed more real, and I felt more connected to all the thousands of lives around me than I did anywhere else—connected to the worms in the soil, the butterflies careening among the cosmos, the cardinals calling one another from the branches of our white lilac tree.  I wanted to be near enough to spy on the bees working their dizzy magic, near enough so that the flowers would, as Dickinson writes, “make me regret / I am not a bee” (808).  Beyond the garden was noise and flash and distraction, the next-door neighbors arguing, planes roaring overhead, and the distant wash of cars on the highway—people rushing off to a world that seemed preoccupied with less vital things--at least to me.  There in the garden was the much smaller, more vibrant world that Dickinson describes in Poem 1746:

The most important population
Unnoticed dwell,
They have a heaven each instant
Not any hell.

Their names, unless you know them,
’Twere useless tell.
Of bumble-bees and other nations
The grass is full.

The garden to me, as a kid, felt like existence at its most essential.  While I reveled in its beauty, I don’t really think I held a romanticized notion about the pretty flowers, because, I saw life and death quite clearly for what they were when I was in the garden.  In fact, I think if you want a child to understand death, you give her a hoe, a spade, and a pair of shears, and you send her out to vanquish the weeds, turn the compost, and deadhead the roses.  Much as Emily Dickinson did in her own mother’s garden when she was growing up, I saw death all around me in the garden—and in some cases, I was even the cause of it, whether I wanted to be or not.  I quickly learned that this was an unavoidable part of being a gardener.

I also witnessed intimately how everything that dies helps to bring new life into the world.  And that many of the plants that died each year had ingenious ways of coming back to life the following spring.  As Dickinson asks, “If a pod die, shall it not live again?” (Prose fragment 18)  Over time as I continued to garden, continued to watch pods die each season and then live again, and continued to read Dickinson’s poems about the gardens, orchards, and fields surrounding her home in Amherst, I knew that I had found a kindred spirit—and isn’t this one of the key reasons that we read (and write) poetry?  Dickinson herself called the poets she read “the dearest ones of time, the strongest friends of the soul.” 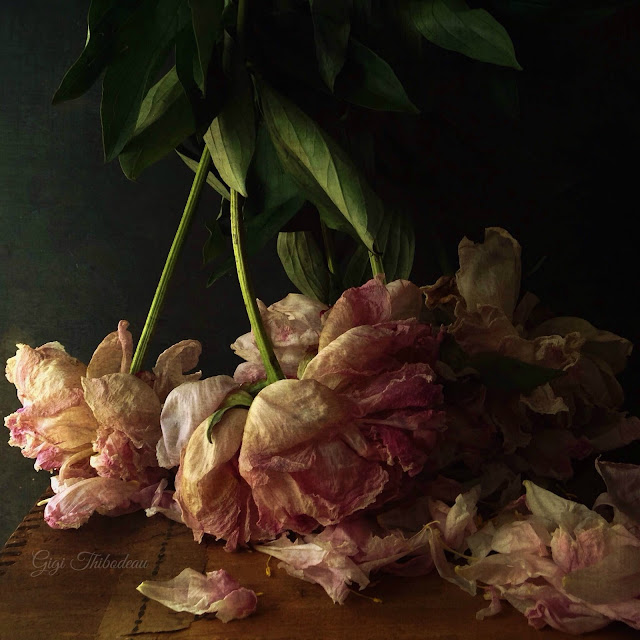 As a girl, I couldn’t put into words what I was discovering about the interconnectedness of life and death in the garden.  In fact, I don’t even think I can now, really.  As Dickinson writes,  “Nature is what we know— /Yet have no art to say" (668).

But she doth protest too much, because she did have the art to say it: When Roses cease to bloom, Sir, /And Violets are done,” she writes,

When Bumblebees in solemn flight
Have passed beyond the Sun —
The hand that paused to gather
Upon this Summer's day Will idle lie — in Auburn —
Then take my flowers — pray!”

Or in “A Bird came down the walk," where she describes the bird that bit an angle worm in halves, “ate the fellow raw,” drank some dew from the grass, and then “hopped sidewise to let a beetle pass.”  She intimately captures in her poems Tennyson’s “nature red in tooth and claw”  (“In Memoriam A.H. H.") with a scientist’s precision and a poet’s sensibility.  At the same time, she also explores the sacred in the everyday.  “I hope you love birds too,” she wrote to her cousin Eugenia Hall. “It is economical. It saves going to heaven.”  And in “Some Keep the Sabbath” (236) that great old chestnut taught in Introduction to Literature courses everywhere, she eschews conventional religion, finding her spirituality in the family orchard:

Some keep the Sabbath going to Church –
I keep it, staying at Home –
With a Bobolink for a Chorister –
And an Orchard, for a Dome –

Some keep the Sabbath in Surplice –
I, just wear my Wings –
And instead of tolling the Bell, for Church,
Our little Sexton – sings.

God preaches, a noted Clergyman –
And the sermon is never long,
So instead of getting to Heaven, at last –
I’m going, all along.

For Dickinson the garden embodied immortality. As a girl, she describes heaven in a letter to a friend as “the garden we have not seen.”  And many years later, just before her death, she asked to have her casket carried—by the workmen who tended the family’s grounds—in a circle around her garden, through the barn, and then up through the field of buttercups to the Western Cemetery in the center of Amherst.  Heaven was inseparable from the flowers, the birds, and the bees, which were all parallels to and metaphors for her own life—for our own lives.  That is not to say that she didn’t see them as ends in themselves, but that by seeing and valuing them for their own sake, she came to understand her own existence all the better.  In the garden she found a way to comprehend mortality—and proof of immortality. 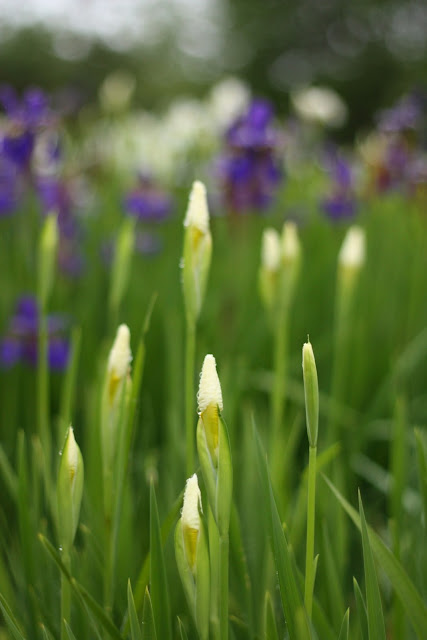 When I was a little girl in the garden with my shears and my spade, Emily Dickinson taught me something that I would later come to feel in my bones as true, and it’s that at root, a gardener thinks about life and death always as one. In each flower's race toward blossoming is its race, too, toward decline. I'm saying nothing new, only that when you garden, this thought is always present. In the spring garden I am surrounded by the new growth of runner bean sprouts, the full flush of a climbing rose, and the last breath of a lush peony all at the same moment. My wheelbarrow is piled high with a day's kill: the weeds I pulled, faded blossoms I plucked, lily beetles I crushed between gloved finger and thumb. The gardener must not be squeamish about death. She must recognize its necessity even as she rejoices at the sight of her first ever iris uncurling itself with a flourish from the spear of its stem.  She must also accept its necessity when that iris blossom dies.

It’s a Saturday in October, and the garden is dying.  But it will live again—improbably, miraculously, this coming spring.  Even as it dies, it is living, and it will always live on, as will the iris, the rose, and the jasmine, the Indian Pipe and the clover, in Emily Dickinson’s words.

And so, because she had the art to say it, as well as anyone ever has, and as reverently, too: 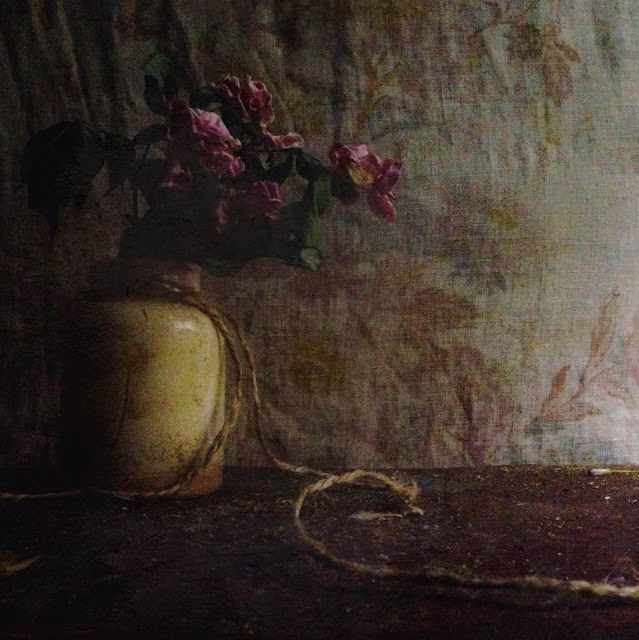 Note: Numbers in parentheses refer to poem numbers in The Poems of Emily Dickinson, edited by R. W. Franklin, 1999.