For this, my final in the series of "inspiration" posts (at least for a little while), I thought I'd include two of my favorite artists: Andrew Wyeth and Mary Oliver. Wyeth, who painted some of his greatest works (including "Christina's World") in Cushing, Maine, died this past winter.  He completed the painting below when he was in his eighties.  Its golden glow comes from four ounces of pure gold he mixed into a wash and brushed over the surface of the painting when it was finished. Oliver lives in Provincetown, Massachusetts, where she writes achingly beautiful poetry and prose.  If you ever need a good bedside read, pick up a copy of her New & Selected Poems or, for prose, her Blue Pastures. 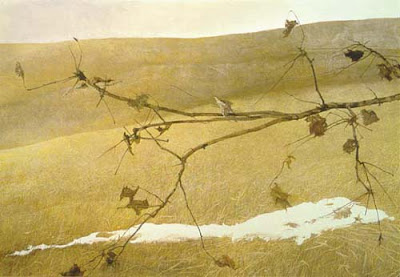 In the deep fall
don't you imagine the leaves think how
comfortable it will be to touch
the earth instead of the
nothingness of air and the endless
freshets of wind? And don't you think
the trees themselves, especially those with mossy,
warm caves, begin to think

of the birds that will come — six, a dozen — to sleep
inside their bodies? And don't you hear
the goldenrod whispering goodbye,
the everlasting being crowned with the first
tuffets of snow? The pond
vanishes, and the white field over which
the fox runs so quickly brings out
its blue shadows. And the wind pumps its
bellows. And at evening especially,
the piled firewood shifts a little,
longing to be on its way.