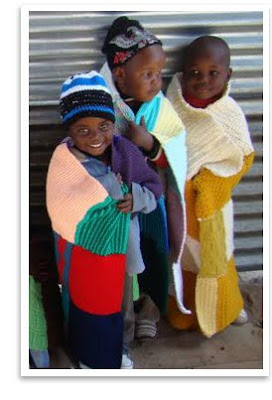 First, I need to thank you for your responses to my last post!  After I asked you all about your favorite charities, I received a remarkable email from a woman named Sandy, the co-founder of a group called Knit-a-Square.  I've asked Sandy if it's okay for me to share a bit about the organization, so here are a few details, in her words:

"[Knit-a-Square is] an ephemeral idea which has taken hold and become a not for profit called KasCare in just over a year,  I thought to cast out the idea to the world of knitters and crocheters and ask them if they would send 8” squares to South Africa where we could make them up into blankets for some of the 1.4 million children orphaned by the twin perils of HIV/AIDS and poverty.  Actually I am in Australia, originally from Zimbabwe, my Aunt lives in South Africa and had told us she regularly bought and gave out cheap blankets at traffic lights to cold children.

We gave up our jobs and work full time now on KAS.   Nearly 50,000 squares, 3,200 items of clothing have arrived from 3,000 members in 34 countries, mostly the States and Canada.  The program is in about 60 schools internationally and we are thinking about how to create a grass roots movement the equal of Roots and Shoots to raise awareness of this mostly hidden but terrible human tragedy, the orphans of Africa."


I thought I'd share Sandy's work here on Magpie's Fancy since I know that some of you are knitters and crocheters, too.  You can visit the site to find instructions for knitting and sending squares.

Here, too, is a poem written by Sandy's husband, Roger McDonald, and collected in his book Heart Yarns:

Why knitting? With a thousand things to choose
of graver consequence I would have thought
that fickle and departed tart, my muse,
might have inspired a more enthralling sport.

But no. So knitting it would have to be.
Two sticks, a length of string and endless time
to make some sense of purl and plain. To me
it seemed a vague and lonely pantomime.

Initially, the battle with disease
looked too unequal. How could knitters armed
with nothing more than needled yarn appease
that monster, AIDS? How could it be disarmed?

A million and a half (or thereabouts),
unparented, abandoned and alone,
hungry, homeless, hopeless, cold. My doubts
soon set about knitting themselves a home

in my gut – a useless site to stitch.
Faithless me. How could I have forgotten
the internet’s electric talking which
energises fibre, yarn and cotton?

Now suddenly your knitting is a rhyme,
a hand-sung hymn, a symphony of clicks
performed by nimble fingers (unlike mine),
a wall of hope in wool instead of bricks.

I’ve come to like your craft, when once I fought
my mother for the right to be outfitted
in any form of garment that I thought
a million miles removed from being knitted.

And like it more for what it represents:
the thin, unbreaking thread of simple love
that salves the small and poor, without pretence.
Is this the proof I search for from above?

Posted by Gigi Thibodeau at 7:43 PM