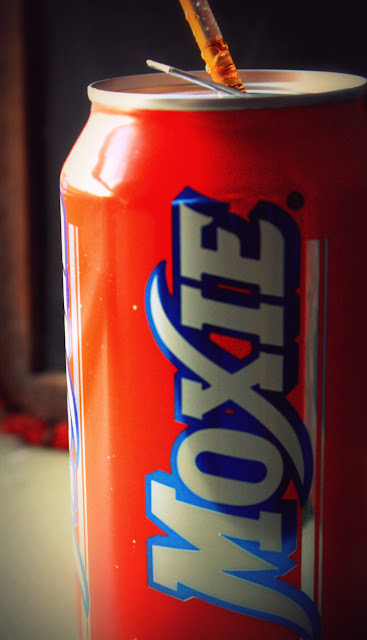 When I was a little girl, one of my mum's friends used to say to me, "Gigi, you've got moxie."  She meant that I had pep, verve, chutzpah, a general can-do attitude.  I loved that she said it, because her saying it made me believe it.  Ah, the power of a word.
This particular word, moxie, is an Americanism borrowed from the trademark name of a 19th-century drink that was originally sold as a health tonic, but, like Coca-Cola, it soon became popular less for its medicinal purposes and more for its distinct flavor.  Unlike Coca-Cola, at no point in Moxie's history did it ever contain cocaine as an ingredient.  Also unlike Coke, it obviously never attained worldwide popularity.  Why it didn't is a mystery to me.    Some folks (my husband and almost everyone else I know) claim Moxie is an acquired taste.  If so, it's one I acquired at birth.  Maybe that's because I grew up in Maine, the state where its inventor, Dr. Augustin Thompson, was born.  Sealing the deal on my Moxie adoration birthright is the fact that I now live in the very city where Dr. Thompson invented his patent medicine, "Moxie Nerve Food" in 1876.  Yup.  Lowell, Massachusetts, is famous for a few things: it's the birthplace of Jack Kerouac, Bette Davis, and Ed MacMahon; for years it was the home of Prince (not the singer, the pasta company--we still have a neighborhood in Lowell called Spaghettiville); and it is the birthplace of delicious and refreshing Moxie. 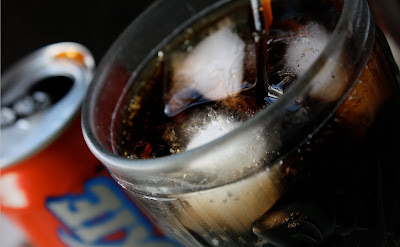 Moxie isn't widely enjoyed or even known outside of New England, but if you can get your hands on a bottle or can, or better yet, a case, I guarantee you will find it an especially useful treatment of "paralysis, softening of the brain, nervousness, and insomnia".  Okay, maybe I can't guarantee all of Dr. Thompson's claims, but I will tell you that when I have a tummy ache, Moxie makes it feel better.  I think it's the Gentian root extract that does the trick.  It's also the Gentian root extract that makes it taste so good, "good" being a highly subjective term.  Others say the Gentian root makes it taste like tar.  They are wrong, of course.  Todd used to say this, but he is now a Moxie convert, I am proud to say.  It only took him nineteen years to acquire the taste.
I am not a soda drinker.  I don't like really sugary drinks.  On occasion, though, maybe once every couple of months, I will have a can of Moxie.  I hate it in these newfangled plastic bottles; they wreck the flavor.  I say this, of course, in my orneriest old-duffer voice.  Back in the day we bought it in thick 8-ounce glass bottles with a picture of the Moxie Man on the front--a fellow in a white lab coat pointing at us like some cross between a clean-cut country doctor and Uncle Sam.  You took one look at the Moxie Man and you just knew this drink had to be good for you.  These days he's still on the plastic bottles, but they've taken him off the cans, at least the cans I can find in my area.  I've photographed the current cans above, along with a glass of Moxie on the rocks (Moxie on the Roxies, I called it as a kid).  I miss Dr. Moxie, but I'm just glad this old-fashioned drink is still around.  It gives me pep.  It gives me vigor.  It gives me know-how and a can-do (forgive the pun) attitude.  Others may like their Coke and their Pepsi, and even their Dr. Pepper, but I'm with Dr. Thompson, who always said, "Make Mine a Moxie."
For more information on Moxie, visit here.
For information on the annual Moxie Festival in Lisbon Falls, Maine (you know you want to go!), visit here.
Posted by Gigi Thibodeau at 11:29 PM