A is for Apple

Thanks, everyone, for your replies to the giveaway!  If you haven't entered it yet, please do.  I'll be drawing the winner tomorrow at noon EST.
For the month of March, I've decided to create my own photographic alphabet here on Magpie's Fancy.  Now that I have this new camera, I thought what better way to experiment with it than by playing with another of my obsessions: letters. 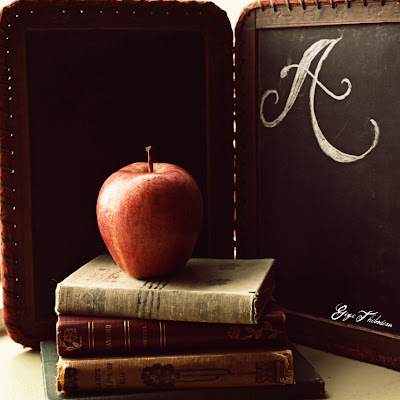 It may be conventional to begin my alphabet with an apple, but I adore apples; I also adore this lovely vintage school slate that my mother gave me for my birthday this past fall.  Someone bound two slates together to make a little book.  It seems only fitting to place an apple with a slate.  Actually, instead of conventional, I'd like to think of it as classic.

Besides, I thought I'd share this apple poem that I wrote over a decade ago.  Within it are the names of several real varieties of apples and a couple that I invented for the poem.  (Note to self: I want to be a namer of things when I grew up, like a nail-polish namer or a paint-chip namer, or, yes, an apple namer.)  They're gorgeous, these names, like little treasures for the tongue!  This also happens to be an alphabet poem, and it's inspired, in large part, by my mum and by the time in our lives right after my father died.  It's about beginning and ending . . . and beginning again.  Just like memorizing the alphabet when we're young.  At the end of the song, we ask, "Next time won't you sing with me?" because we learn by trying again, and we look to those who know all the letters to help us when we lose our way.

She learns apple before she is born:
her mother sits beneath a tree at Green Point Farm,
slices crisp moons of McIntosh,
teases them from the blade with her teeth,
filling her Rome Beauty belly.
A is for apple, she sings—
Sack and Sugars, Slack My Girdles,
Golden Knobs.
The girl kicks in reply,
begins her hungry life.


Over time they make pies, cider,
sauce.  Delicious, she learns,
aren’t delicious at all, and crabs
are best for jelly.
When her mother reads her
Snow White she knows why
the girl craves the Queen’s apple,
heart-red, white as her own skin—
biting in, she becomes a greater tale to tell.


A is for ask, appetite, apologize—
Eve and Aphrodite stand sorry before her
in the Children’s Book of Ancient Stories,
apples in their upturned hands.
With a pencil she draws them: Eve’s Incomparable,
Aphrodite’s Perfection—fruits she will eat
until the basket is empty.


Brown Snouts are bitter sweet
for blending with Hangdowns and Golden Drops.
She can pare one in seconds,
say the alphabet while she twists the stem:
Who will she marry?  K or M?
She makes a crust to catch him,
packs it full of Seek No Furthers,
bakes it till the sugar runs, sets it on the windowsill,
waits for her prince to come.


A is for apple, answers.  Her mother, alone,
shines Jonagolds with her coat sleeve,
teaches her to carve swans and crowns, stud them
with cloves, make tarts from Grannys,
butter from Ida Reds, dry the Packhorses
and Admirables for apple dolls
with black, beaded eyes
and the faces of wise old women.

Posted by Gigi Thibodeau at 1:38 PM