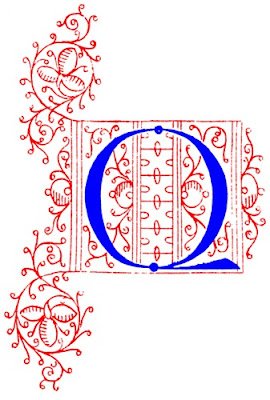 is for Queens and Quests 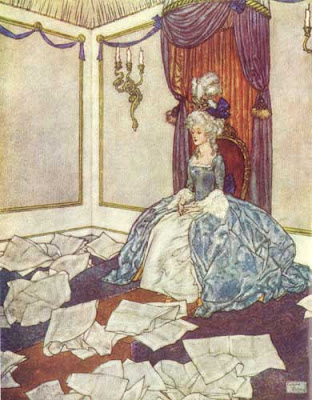 One of my passions in life is fairy tales.  Give me a story with a queen, a prince, a tower, a quest, a cat in swashbuckler boots, or a cursed frog, and I will lose myself in it.  That's why I am happy to celebrate the birth of one of the great literary fairy tale writers, Hans Christian Andersen, who turns 205 today.  Unlike the Brothers Grimm, who gathered, altered, and published several editions of traditional oral fairy tales, most of Andersen's tales were original works, including The Ugly Duckling, The Little Match Girl, The Red Shoes, The Nightingale, The Emperor's New Clothes, The Little Mermaid (Disney's version is very different from the original, which is absolutely beautiful), Thumbelina, and the tale that many consider to be his masterpiece, The Snow Queen.  The Snow Queen illustration above is from an edition of Andersen's tales published in 1911 with illustrations by one of my favorite fairy tale illustrators, Edmund Dulac.

If you're reading this post today, April 2, you might want to fly on over to Google to see their tribute to Andersen.  And if you're a fan of fairy tales, too, there's a lovely recent collection of his works edited and annotated by the wonderful Maria Tatar. 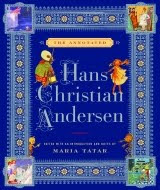 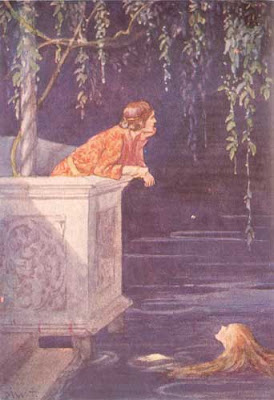 A Margaret Tarrant illustration for The Little Mermaid
In many ways, Andersen's own life was a quest for recognition, which he eventually received, and for love that he never found.  While he wrote memoirs that colored his life as a fairy tale, the truth of his life was far from enchanted.  His tales are achingly beautiful, often satirical (read The Nightingale for a scathing portrait of aristocrats), explorations of love, the quest for spirituality, and the importance of the artist in society.
A special note of thanks today to all my blogging friends.  Your comments and sense of community inspire me and teach me.  Have a wonderful weekend, and if you celebrate Easter, may it be a blessed and peaceful day of joy.  xo
Posted by Gigi Thibodeau at 5:34 PM