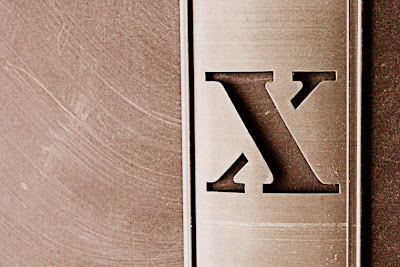 Remember when you were a child reading your ABC books?  The early letters were simple: A is for Apple, D is for Dog, L is for Lollipop or maybe Lemon.  Toward the end of the alphabet, things became more tricky, especially when it came to X.  By default, most books read, “X is for Xylophone," since so few words a child would ever use begin with X.
In fact, few words an adult ever uses, besides Xanax, begin with X.  A few of my favorites include Xyloid, for something wooden or woody; Xanthine, for something yellowish in color, Xerotic, for something dry (nowhere near as interesting as the word looks or sounds); and Xiphoid for sword-shaped.
One of the most fascinating X-words is Xanthippe, which means a shrewish nagging woman.  Actually, Xanthippe originally meant a blond horse (In Greek, xanos=blond, [thus xanthine=yellowish] and hippo=horse).  Xanthippe came to mean a shrewish woman because it was also the name of the wife of Socrates.  The Greeks often named people after horses, much like people today sometimes name kids after cars, like Mercedes or Porsche (Porsche, by the way, is a variant of Portia, which in Latin means pig--think porcine).   Socrates apparently adored his wife and praised her for speaking her mind.  Other men, including some of his pupils, weren't quite as fond of her opinions and confidence.  Over time, her assertiveness became labeled shrewishness, and her name became synonymous with what today people might call a bitch.  Hmmmmm . . . where have we heard this story before?
My all-time favorite X-word, though, is, of course, Xanadu, for the "stately pleasure dome" written about by Coleridge in Kubla Khan in 1797, and then re-imagined in the 1980's in that roller-skating disco film  starring Olivia Newton John.  Who could ever forget the Xanadu theme song?  "Now we are here in Xana-du-u-u-u . . . ." 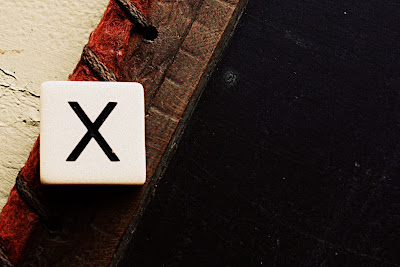 So, it’s true, X doesn’t begin all that many words in English--dozens rather than thousands.  In order for X to have its eks sound in a word, it needs to be preceded by a vowel, like e, for eXample.  Otherwise, X sounds like Z, as in Xylophone, so this is no help to a girl who's just trying to learn her sounds.  In fact, it's positively eXasperating.
But think of the eXcitement when you slip X inside a word, or how eXceptional it is on its own: L doesn’t mark the spot, or Q, or even D.  No--X, in all its cross-hatched glory, marks the spot.  And for centuries, X has been a legal signature if one couldn't sign one's name.  That's power.
It's also half the fun of tic tac toe.  And it's the kisses in xoxo.  It's the unknown in the X-Files.  It's the anonymous or unnamable or the missing.  It's the task we complete and X off our list.  And as Simon Cowell can tell you, it's that special talent, that X-factor, that it's difficult to name, but when we see it, we just know.
And then there’s three in a row: 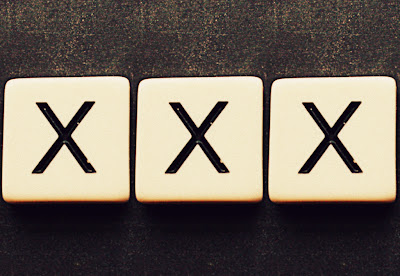